What message did China send by choosing Uyghur torchbearer? 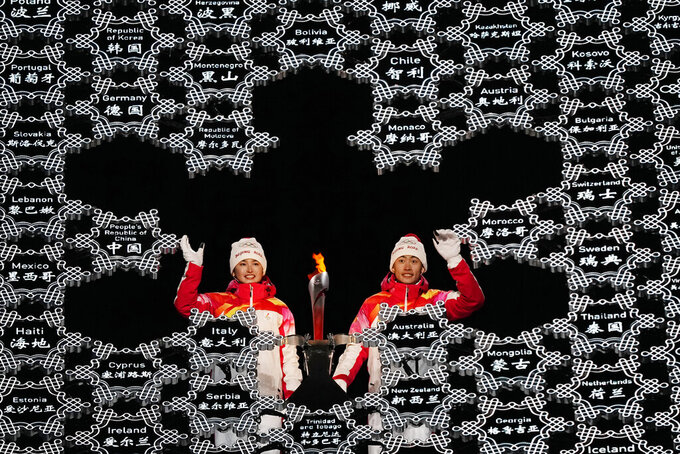 BEIJING (AP) — As soon as a Uyghur athlete helped light the Olympic flame at the Beijing Olympics, the debate began: Was it a defiant signal from Chinese leaders, or proof that protests around the world were having impact?

The selection of Dinigeer Yilamujiang for the supreme honor of being a final Olympic torchbearer at the ceremony that opened the Winter Games in Beijing on Friday night was a huge surprise.

What it meant — because Olympic gestures like this always have meaning — wasn't clear.

U.S.-based human rights lawyer Rayhan Asat — whose brother Ekpar Asat is among more than 1 million Uyghurs that China has imprisoned — was at first aghast.

The pictures of Yilamujiang, a 20-year-old cross-country skier, holding the torch with Zhao Jiwen, a skier from China's dominant Han majority — both of them all smiles — reminded Asat of the half-Jewish fencer, Helene Mayer, who competed for Germany at the 1936 Summer Olympics that Adolf Hitler hosted in Berlin.

“I did feel like history is repeating itself,” Asat said in a phone interview. “This is like a new low. That is how I felt, initially.”

But on reflection, Asat saw crumbs of encouragement. China has steadfastly rejected international criticism of its crackdown on Uyghurs, treatment that the U.S. government and others have said is tantamount to genocide. China's hosting of the Games has made many exiled Uyghurs feel that their voices aren't heard.

But the selection of a relatively unknown athlete to light the flame couldn’t be a coincidence. Asat said, after her initial outrage had subsided, she figured China isn't as immune to outside criticism as it pretends.

“It obviously cares profoundly about outside criticism. This is why it’s important that we keep criticizing,” she said. “I do feel like Beijing is very much scared that it has lost its international reputation."

China says the detention centers in the western Xinjiang region were built to fight Islamic extremism. Leaders say the camps provided job training and have since been closed. Uyghurs overseas say their loved ones are still imprisoned.

Some saw the choice of Yilamujiang as a deliberate poke in the eye to critics.

“That was very, very much a deliberate choice," said Darren Byler, an assistant professor of international studies at Canada’s Simon Fraser University who has written extensively about the camps.

“I think it should be read as China saying we are not backing away from our stance on what we’re doing in Xinjiang and we don’t really care what the world thinks about it,” Byler told The Associated Press by phone.

The Chinese public has been mobilized to support Xinjiang following an international campaign against the use of cotton from the region amid allegations of forced labor.

“I think that this was intended for an international audience primarily but certainly for the domestic audience as well as a sign of defiance and strength,” Byler said.

Officially, there has been little commentary on Yilamujiang's role, although the Communist Party newspaper Global Times wrote Saturday that her Xinjiang background was “worth noting."

International Olympic Committee spokesperson Mark Adams said it did not take a torchbearer's ethnicity into consideration when giving its approval, but added; “I think it was a lovely concept.”

Among the multiple human rights issues overshadowing the Games, Xinjiang by far looms the largest.

Human rights groups have dubbed these the “Genocide Games,” and the U.S. and several other Western democracies have cited rights abuses in staging a diplomatic boycott of the event.

Uyghurs, who are culturally, linguistically and religiously distinct from Han Chinese, have long resented Beijing's heavy-handed rule and the influx of migrants who have reaped economic benefits in the resource-rich region.

The resentment erupted into a series of violent incidents labeled terrorism by China, leading president and Communist Party leader Xi Jinping to demand a mass crackdown. The network of camps was established around 2017.

Critics and former inmates told of strict discipline and harsh living conditions inside. Other reports spoke of families separated by the authorities, mass surveillance and coercive birth control policies forced on Muslim women.

China dismisses accusations of abuses as “the lie of the century" and says its policies have resulted in an end to separatist violence. Critics say the result has been a traumatized population, cultural dislocation and continuing abuses.

China's policies in Xinjiang should have elicited a stronger response from the international community, including a total boycott of the Games, said Kamaltürk Yalqun, a Uyghur was one of several students chosen to help carry the Olympic flame ahead of the 2008 Summer Games in Beijing.

“It should be a collective responsibility when such kind of atrocities are happening,” he said. “It’s heartbreaking for me to see such a cold response from people.”

Whether Yilamujiang sees a political role for herself isn't clear. Her social media posts have focused entirely on her desire to compete successfully.

Born in Xinjiang's far-northwestern Altay prefecture that borders Kazakhstan, Russia and Mongolia, she was first coached by her father, himself a pioneer in Chinese cross-country skiing. The practice of using felt-lined skis to travel and hunt in the region is believed to date back thousands of years.

The fact her parents are both government employees provides the right sort of background to receive the government's political and financial support required by virtually all elite Chinese athletes.

Among the Chinese public, information about Xinjiang is derived mainly from government propaganda that emphasizes economic development and social harmony, while dismissing all outside criticism.

At a park just north of the stadium Saturday, Beijing residents told The Associated Press they saw Yilamujiang’s participation as a show of ethnic unity devoid of any political message.

“When I saw two athletes, my first reaction was gender equality," said Jiang Miya, adding she perceived no real link to the issue of Xinjiang or politics in general.

Another resident, Wang Yang, said the event sent a message of “unity and progress" that shouldn't be tainted by politics.

“Don’t magnify or politicize this kind of issue," Wang said. “We should separate sports and politics, enjoy the Olympics wholeheartedly, and talk less about politics.”