Afghans arrive for Paralympics; to be mostly out of sight 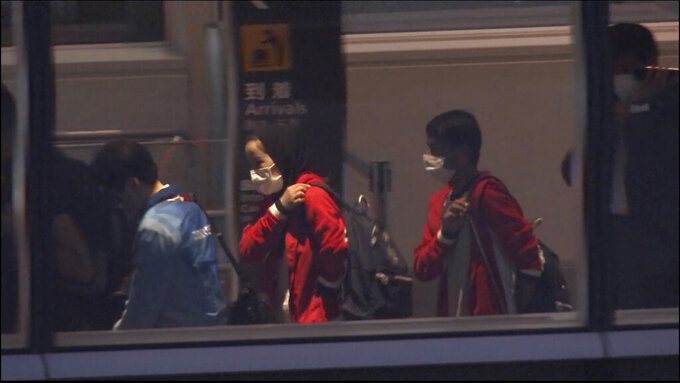 In this image made from a video, Afghan athletes Zakia Khudadadi, center left, and Hossain Rasouli, center right, arrive at Haneda airport in Tokyo Saturday, Aug. 28, 2021. They have arrived in Tokyo, via what's been described as a harrowing journey from Kabul to Paris, to compete in the Paralympics. (TBS via AP)

TOKYO (AP) — Afghan athletes Zakia Khudadadi and Hossain Rasouli have arrived in Tokyo, via what's been described as a harrowing journey from Kabul to Paris, to compete in the Paralympics.

For now, they are sequestered in the Paralympics Village alongside Tokyo Bay, will not be available for media interviews during their stay — before or after they compete. And where they go after the Games close on Sept. 5 is unclear.

The International Paralympic Committee said they arrived in Tokyo from Paris early on Saturday evening, having passed all the required COVID-19 tests to enter Japan. IPC spokesman Craig Spence said they'd need a few days to get their bearing and needed some privacy.

“This is a really complex situation, one of the most complex we’ve ever been involved in," Spence told a briefing Sunday. "So what we can say is limited. Human life is the most important thing here. Having the athletes here isn’t about getting media coverage. It’s about these athletes fulfilling their dream of being able to attend the Paralympic Games.”

Spence did not say how they got out of Kabul, but mentioned the help of several governments and other agencies. He had said for several days that the IPC was monitoring their whereabouts, and at the opening ceremony on Aug. 24, a volunteer carried an Afghan flag to represent the absent team.

The addition of the Afghan team means that 163 delegations are participating, which includes a refugee team.

“We always knew there was a remote chance both athletes could participate at Tokyo 2020 which is why the Afghan flag was paraded at the Opening Ceremony," IPC President Andrew Parsons said in a statement from the IPC.

“Like all the athletes here at Tokyo 2020, we never gave up hope, and to now have Zakia and Hossain in the Paralympic Village alongside 4,403 other Paralympians shows the remarkable power of sport to bring people together in peace.”

Khudadadi would become the first female Afghan athlete to compete in the Paralympics since 2004. She will challenge in the women’s 44-49-kilogram weight category in taekwondo on Thursday.

Rasouli has a tougher road.

He was to run the 100-meters in the T47 class, but arrived too late for that. So organizers placed him in a 400-meter race for next Friday. Apparently, he was not enthused about that choice, which Spence revealed in quoting Rasouli.

Instead, he's been entered in Tuesday's long jump in the T47 class — and without much practice.

The question of asylum hangs in the air and will they return to Paris?

“That is a question that will be open to the athletes to choose,” Spence said.

“We have a duty to protect these athletes," Spence added. "And that starts with their welfare and their mental health. The last thing they want at the moment is to be asked multiple questions about what’s going on, or the future.”

Spence choked back tears a few times as he described a meeting on Saturday evening at the Paralympic Village with Khudadadi and Rasouli, IPC President Parsons, and other officials.

“As you can imagine the meeting was extremely emotional,” Spence said. "There were lots of tears from everyone in the room. To actually see them in person — they’re actually here — was remarkable.”