After Beijing bubble bursts, can the IOC save the Olympics? 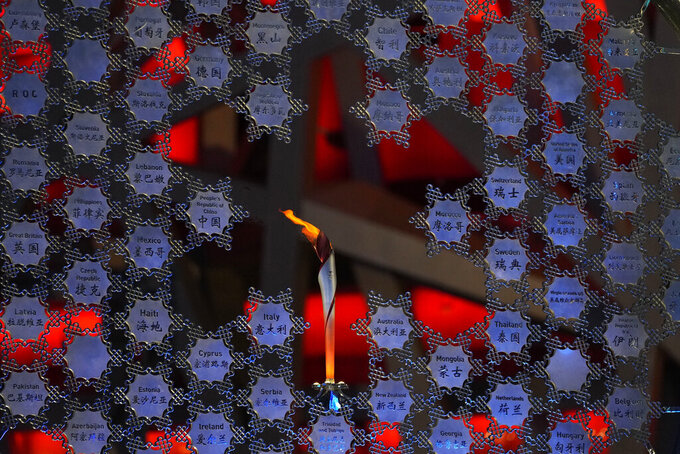 FILE - The Olympic flame burning in the center of the snowflake-shaped cauldron is on display near the National Stadium during the 2022 Winter Olympics, Tuesday, Feb. 8, 2022, in Beijing. (AP Photo/Natacha Pisarenko, File)

BEIJING (AP) — Before he got out of town, the great Canadian snowboarder Mark McMorris called the Beijing Games a version of “sports prison.” He was joking — sort of — but his vision wasn't that far off.

The cordoned-off Olympic bubble that folds up when the closing ceremony ends Sunday has produced its usual collage of amazing athletes doing great things. This 17-day journey, however, has been witnessed through a sealed-off looking glass — a lens warped and sterilized by Beijing's organizing committee with underwriting from the Chinese government.

The ultimate sponsor: the International Olympic Committee, which has been under fire for producing Games that, to many, have felt soulless while also being tainted by scandal and political posturing.

“I think that sometimes it doesn’t seem like their heart is in the right place,” the outspoken freestyle skier Gus Kenworthy said. “It feels like it’s a greed game. I mean, the Olympics are so incredible. But it’s a TV show."

As the IOC pulls up stakes from Beijing, it has 29 months to hit the reset button and hope for a different, COVID-free and much better vibe when the Summer Games go to Paris.

The lingering question is whether, even in a more-welcoming, democratic locale, the Olympic overseers can repair their reputations to the point that people — most notably, the dwindling TV audience and the increasingly alienated throng of athletes — start to enjoy this enterprise again.

Some images they'll have to work to forget:

—The thousands of testers, cloaked head to toe in personal protective gear, shoving swabs down athletes' throats day after day for their mandatory COVID-19 screenings.

—And, of course, the Russian doping scandal, all perturbingly encapsulated by the image of 15-year-old figure skater Kamila Valieva crying after her disastrous long program while her coach asked: “Why did you stop fighting?”

“Surprising, weird and hyper-dramatic,” Thompson said. “Yet today, I searched the hallways in vain to find anyone who had seen it, or even heard tell of it. I’ve been paying close attention to the Olympics for 40 years, and never have I seen one surrounded by so much silence, so little buzz.”

Through last Tuesday, the Nielsen Company said prime-time viewership on NBC ( which pays the lion's share of the bills for these Games ) and its streaming service, Peacock, was down 42 percent from a 2018 Games that didn’t do all that well, either.

The simplest explanation is to point toward the ever-increasing menu of viewing options and the time difference; this was the third straight Winter Games held in Asia.

That the IOC had to turn to authoritarian Russia, then China, for two of its last three Winter Olympics speaks to a larger problem that underscores how much less people care. Cities willing to foot the bill for the Games, then share the heat with the IOC over a years-long buildup, are harder to find these days.

With only one other choice for 2022 — Kazakhstan — the IOC decision to hand over one of its crown jewels to China came with compromises.

Beijing’s organizing committee, and, in conjunction, the Chinese government, took extreme measures to keep the COVID-19 virus, which originated inside its borders two years ago, from spreading. It also made subtle but persistent suggestions that speaking out about any issue that makes for bad headlines in China — human rights, Uyghurs, Taiwan, Hong Kong, pollution — were not welcome.

Athletes were gently reminded that the IOC's much-discussed and somewhat-liberalized Olympic demonstration rules were secondary to China’s own laws and customs, which do not encourage dissent. The penalty for violating? Nobody was sure. But these Games brought with them the looming threat of a positive test, maybe from out of the blue, that could end an athlete’s chance for glory before it even began.

Many countries advised their athletes to leave their cell phones at home, afraid of government cyberhacks and information harvesting.

“How does an environment where you know you’re being surveilled bring commonality?” asked Rob Koehler, of the advocacy group Global Athlete. “There’s no joy in any of that.”

There were some beautiful moments, too, along with some others that brought out the raw emotion in a way that only the Olympics can.

Shaun White's farewell to snowboarding after five Olympics touched hearts. Mikaela Shiffrin's willingness to unflinchingly face her setbacks was a reminder that there's more to be gained from these games than trips to the medals stand.

China's favorite story might have come from Gu. The 18-year-old freeskier made history by becoming the first winter action-sports athlete to win three medals in the same Olympics — two golds and a silver.

The fact that Gu is American and chose to compete for her mother's homeland of China, however, made it clear that, her good intentions aside, there is no taking politics out of these Games.

When Bach brought the Chinese tennis champion Peng, whose safety has been in question for months, to the venue for Gu's first contest, cynics ripped the IOC for using the teenager's golden moment to help whitewash the perceived sins of its hosts.

At its core, the Olympics are supposed to be a celebration of sports where the world comes together for two weeks to forget its problems. They are not supposed to dabble in politics.

In many eyes, any remnants of that worldview disintegrated on Day 1, when Russian President Vladimir Putin, his country actively amassing troops along the Ukrainian border, joined Bach and China’s president, Xi Jinping, at the opening ceremony.

The facade crumbled and jumbled further when Bach denounced Russia — “It was chilling to see” Valieva berated by her coach, he said — then a Kremlin spokesman denounced Bach.

In the end, no athlete's plight told the story of the Beijing Games more viscerally than that of the 15-year-old skater.

When the litany of Russian doping scandals started unfurling, shortly after the end of the 2014 Sochi Games, the IOC had the advantage of the knowing that the reports, the meetings, the terrible headlines and the chaos would largely take place outside of the Games themselves and out of the general public's view.

The Valieva case can be fairly viewed as a byproduct of all the half-measures taken to sanction the Russians. But her drama played out while the party was in full swing;. It clouded virtually every aspect of a Games that already had issues.

“We are dissatisfied because what we love about sport is the authentic pioneering struggle to redefine the possible, or to compete head to head, pouring every measure of devotion into the effort," Max Cobb, an outspoken leader in U.S. Olympic circles, wrote in an essay this weekend.

“It’s a great mix of awe and honest effort that inspires,” Cobb wrote, "except when it isn’t.”