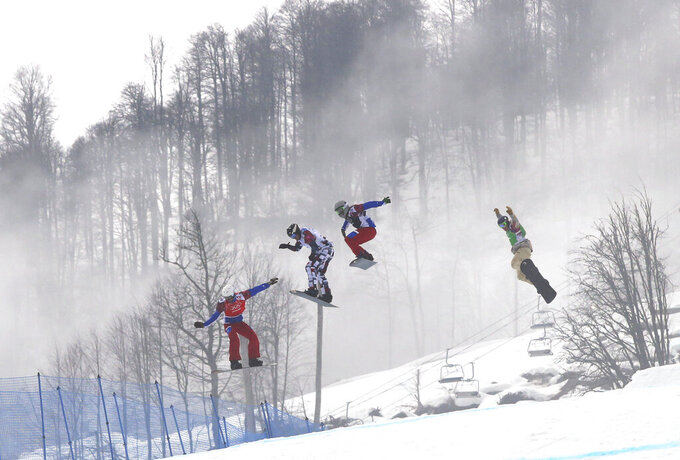 ZHANGJIAKOU, China (AP) — Nick Baumgartner stopped in midsentence, the emotions welling up as he thought of an injured teammate who couldn't join the U.S. snowboardcross team at the Beijing Olympics.

“Sorry, I'm kind of a crybaby all the time,” the 40-year-old American racer said Saturday. “But it’s tough."

Tough not seeing Alex Deibold in Team USA gear in China after he suffered a head injury in a crash during qualifying at a World Cup event just days before his scheduled arrival in Beijing. Deibold, the wax technician-turned-Olympic bronze medalist, was looking to add to the third place he took at the 2014 Sochi Games.

Instead, he's watching his teammates, and that turn of events hit them hard.

“I was just texting with him and I’m thankful that I am able to text with him because it was it was definitely a little scary,” Hagen Kearney said of Deibold's crash in Italy last weekend. "Head injuries are no joke. So I think that’s the biggest takeaway: He’s going to be OK.

“But yeah, it definitely would have been nice to have him here.”

The 35-year-old Deibold has been a member of the U.S. snowboard team since 2004.

His spill had his teammates fearful.

“We got word right away that he was doing good,” Mick Dierdorff said. "It’s so tough for him. He’d love to be here.”

Deibold posted an upbeat video on social media before the opening ceremony to root on his teammates. With a scrape under his eye and a bandage on his neck, he said it was “unfortunate” he wasn't there but added that “does not mean we're not sending a super bad-(expletive) team.”

Taking Deibold's place was 23-year-old Jake Vedder, who is making his first Olympic appearance. It's a bittersweet moment.

“I’m really trying to represent Alex and his whole family and do the best I can for him," Vedder said. “Because this was 100% his spot. He deserved to be here. I’m trying to enjoy my first Olympics, but really keep that in the back of my mind.”

In this wild sport, there's no playing it cautious — even a week before the Olympics. Snowboardcross is an event where multiple riders simultaneously fly down the same course full of jumps, banked turns and other features. It's rough and filled with spills.

“If you play it safe and you take it easy, you’re not going to be ready for the Games,” explained Baumgartner, whose best finish in three trips to the Olympics was fourth at the 2018 Pyeongchang Games. “He was just out there preparing, getting ready to come here and do the best he could. He took a crash that scared us big time. We’re just thankful that he’s OK.”

Just about then, Baumgartner began to tear up.

“Bummed enough to see him not be able to give it one more shot,” Baumgartner said. “We're going to do it for ourselves and our families, but absolutely, we’re going to do this for Alex Deibold as well.”