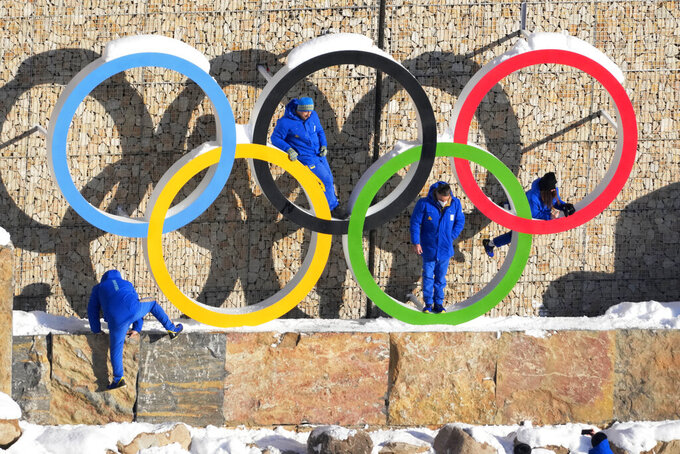 Ukraine team members climb on the Olympic Rings to pose for photo in the Olympic Village at the 2022 Winter Olympics, Monday, Feb. 14, 2022, in the Yanqing district of Beijing. Backers of Sapporo, Japan, to hold the 2030 Winter Olympics have gotten together to promote their bid. The Japanese city is competing with Salt Lake City, Vancouver, and a Spanish group that wants to return the Olympics to Barcelona. (AP Photo/Dmitri Lovetsky)

TOKYO (AP) — Yasuhiro Yamashita, the head of the Japanese Olympic Committee, acknowledged the biggest stumbling block to holding the Olympics is the billions in costs.

However, in another breath on Tuesday at a so-called “All Japan” meeting to promote Sapporo's bid for the 2030 Winter Olympics, he said that if the northern Japanese city lands the Games, little new construction will be needed — a major expense for every Olympics.

“From both inside and outside our country, there are many views about hosting the Olympic and Paralympic Games,” Yamashista said, among politicians and business leaders online — and in Sapporo — talking up the bid. “I realize there are also concerns about the huge costs involved.”

The official cost for last year's delayed Tokyo Olympics was $13.6 billion, although government audits suggest it may have been much more. At least 60% was public money.

Yamashita referred to a new host-selection policy promoted by the International Olympic Committee, which had for decades encouraged building shining new arenas and stadiums that have quickly become white elephants.

“It is no longer about building something for the event, but it's about hosting the event to build the city," Yamashita said.

Sapporo, Salt Lake City, Vancouver, and Barcelona in conjunction with regions in the Pyrenees, are known to be interested in 2030. It's also possible the IOC will award the 2034 Games simultaneously as it did 4 1/2 years ago in naming Paris for the 2024 Olympics and Los Angeles for 2028.

Under the new, largely opaque process, the IOC does not confirm any candidates at the early stages. Contenders can promote themselves as publicly as they wish — or as little.

“I am very confident that we have an all-Japan approached to our bid,” said Keigo Iwata, who heads the Sapporo committee.

Technical teams from the IOC have visited Salt Lake and Vancouver in the last few weeks. The three-person teams have not offered comment. A team is expected to visit Sapporo later this month. No visit to Spain is known to be planned.

Salt Lake and Sapporo will not hold public referendums on the bids. Vancouver also seems unlikely to hold one, while reports in Spain say it's required. Referendums have killed many Olympic bids — particularly in Europe — with the public seldom approving when asked.

Salt Lake and Sapporo have projected similar costs — between $2.2 billion and $2.6 billion. Neither Vancouver nor Barcelona has publicly floated cost figures. Olympic costs typically run over budget, and estimating accurate costs almost a decade away is impossible.

Sapporo and Salt Lake would appear to be the leaders. Salt Lake has almost all the venues in place from its 2002 Winter Olympics. Fraser Bullock, who heads the bid committee, has said he expects to land 2030 or 2034.

The only impediment for Salt Lake in 2030 is the fact that Los Angeles is set to hold the 2028 Summer Games. This would put the Olympics in the United States twice within an 18-month period.

Sapporo, which held the 1972 Winter Olympics, is likely to also use facilities from the 1998 Nagano Winter Games. Nagano just recently paid off the debt from holding those Games.

Sapporo also got high marks from the IOC for holding the marathon and race walks for the one-year delayed Tokyo 2020 Olympics.

Vancouver has the attraction of being the first "Indigenous-led" bid, headed by Canada's First Nations. It also has many venues in place from the 2010 Winter Games, but seems behind the other two in bid preparations.

The new bid process was partly made by fallout from vote-buying scandals that sullied the 2016 and 2020 Olympics. The bidding for the 2002 Salt Lake Games was also caught up in a corruption scandal.

The IOC could pick the 2030 venue in May 2023 during meetings in the western Indian metropolis of Mumbai. IOC members will be expected to give rubber-stamp approval to recommendations of the executive board and IOC President Thomas Bach. A dual award is also possible.