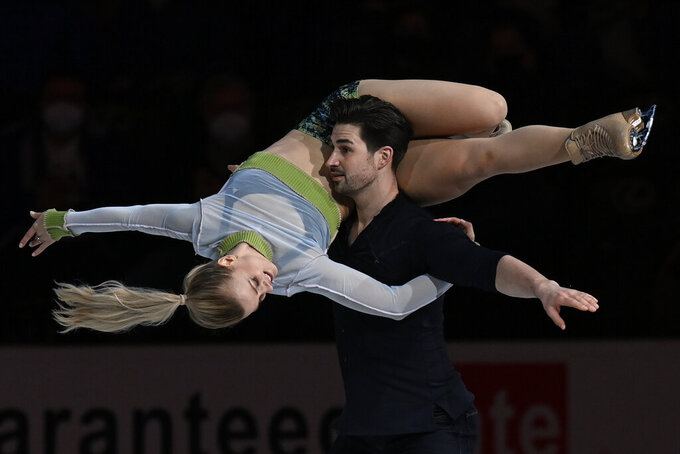 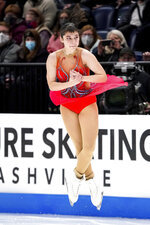 Nathan Chen has accomplished just about everything that one can accomplish in the sport of figure skating.

Six consecutive national championships, the most since two-time Olympic champion Dick Button in the 1940s and '50s.

Three consecutive world championships, the best run by an American since Scott Hamilton in the early '80s.

Nearly four years with only a single defeat, a run that includes three consecutive wins at the Grand Prix Final.

The only thing he's yet to accomplish? Winning Olympic gold.

The 22-year-old Chen blew his chance four years ago in Pyeongchang, when an unusually poor short program cost him a chance at a medal; he rallied to finish fifth. But he's about to get another shot next month in Beijing, when Chen goes toe-to-toe with two-time defending gold medalist Yuzuru Hanyu and a stacked field at historic Capital Indoor Stadium.

“Every season my goal is to keep improving,” Chen said after shattering his personal-best score at nationals last week. “I'm looking forward to going back and working on whatever goals I have for the Games. I'm just enjoying this moment.”

The showdown between Chen and Hanyu will be the highlight of the entire Olympic program.

The American comes armed with an array of quadruple jumps that rival anyone in the world, while his artistry takes him beyond being just an athlete to being a bona fide performer. The biggest question surrounding Chen is what programs he'll unveil in Beijing — the programs he used with mixed results earlier in the season or the programs he used at nationals, a short to “La Boheme” and an Elton John medley for his free skate that he used during the 2019-20 season.

“I’m really happy with these programs," Chen said, giving credit to choreographer Shae-Lynn Bourne, “and that’s why it’s awesome to be able to have such amazing choreographers consistently deliver great programs for me, so it’s easy to be able to go back and look through all the work she’s done with me.”

Hanyu withdrew from both of his Grand Prix assignments because an injured right ankle, but he dazzled last month in winning the Japanese championship. His key to victory could rest in becoming the first skater ever to land the quadruple axel — a jump that involves 4 1/2 rotations that he has landed in practice.

“Beijing is an extension of everything I’m doing,” Hanyu said, “and I know I just might have to go all in now.”

Others to watch in the men's competition include Shoma Uno, the reigning Olympic silver medalist who won the NHK Trophy last fall; Vincent Zhou, the American who beat Chen at Skate America and was second to Uno at the NHK Trophy; and the Russian star Mikhail Kolyada, who finished second at his two Grand Prix assignments this season.

It's almost a foregone conclusion that the gold medal will be headed to Russia for a third straight Winter Games. The only question is whether it will be around the neck of world record-holder Kamila Valieva or one of her teammates.

Valieva's score of 272.71 points at Rostelecom Cup was more than 35 points higher than anyone else.

The Russians' biggest competition will come from Japan's Kaori Sakamoto. But keep an eye on 17-year-old Alysa Liu, who withdrew from U.S. nationals after a COVID-19 positive but whose jumping ability gives her a chance at the medal stand.

The U.S. only qualified one pairs for the 2018 Winter Games: Alexa Knierim and Chris Knierim. The Americans have two headed to Beijing, and one of them is Alexa Knierim and new partner Brandon Frazier; they teamed up after Chris Knierim's retirement. The other is Ashley Cain-Gribble and Timothy LeDuc, the first non-binary Olympic athlete.

They're unlikely to compete for medals, though. Evgenia Tarasova and Vladimir Morozov of Russia are the heavy favorites, while reigning silver medalists Sui Wenjing and Han Cong give host China its best shot at the podium.

Madison Hubbell and Zachary Donohue finished one spot out of the medals in Pyeongchang. They lead a trio of American ice dance teams headed to Beijing, and all have a chance to medal. Madison Chock and Evan Bates beat Hubbell and Donohue at nationals last week, while Kaitlin Hawayak and Jean-Luc Baker train at the same school in Montreal as them.

Gabriella Papadakis and Guillaume Cizeron of France lost gold by the slimmest of margins in Pyeongchang. They return as favorites with Russia's Victoria Sinitsina and Nikita Katsalapov and Canada's Piper Gilles and Paul Poirier also in the mix.

Russia's strength and depth, particularly in women and pairs, make it the heavy favorite to win team gold after finishing second to Canada in Pyeongchang. The Canadians and Americans could have a spirited competition for silver and bronze.