Andrés Perea approved for switch to US from Colombia by FIFA 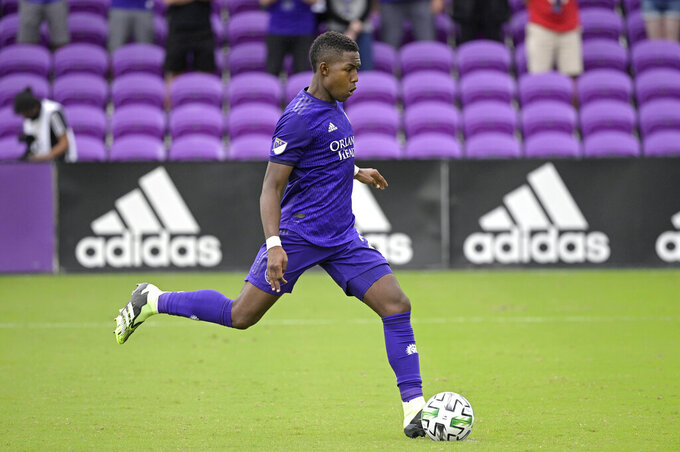 FILE - In this Nov. 21, 2020, file photo, Orlando City midfielder Andrés Perea makes a penalty kick during overtime of an MLS soccer playoff match against New York City FC in Orlando, Fla. Perea is among several dual nationals at American training camp this week ahead of a Dec. 9 exhibition against El Salvador in Fort Lauderdale, Fla. U.S. coach Gregg Berhalter will try to persuade them to commit to the U.S. program. (AP Photo/Phelan M. Ebenhack, File)

Orlando midfielder Andrés Perea has been given approval by FIFA to switch his affiliation to the United States from Colombia.

The 20-year-old trained with the U.S. national team in December and is with the U.S. under-23 team this week in Bradenton, Florida.

The U.S. Soccer Federation made the announcement Tuesday and said it was informed of FIFA's approval on Friday.

“Andrés we find to be a really, really interesting holding midfield player for us,” U.S. under-23 coach Jason Kreis said during a conference call. “The amount of ground that he’s capable to cover defensively, I think it’s a little bit different level than some of the other guys that we have in our pool. His processing of the ball, he’s still learning a little bit about that.”

Efraín Álvarez, an 18-year-old LA Galaxy midfielder, also attended U.S. national team camp last month. Álvarez played for the U.S. under-15 team before switching to Mexico’s U-15s. He scored four goals in seven matches at the 2017 Under-17 World Cup in Brazil, including a 79th-minute equalizer on a 26-yard free kick against the Netherlands in the semifinals, a game El Tri won on penalty kicks.

Kreis anticipates men’s Olympic soccer qualifying for North and Central America and the Caribbean will take place during late March in Guadalajara, Mexico, where the CONCACAF tournament last spring was postponed because of the coronavirus pandemic.

Speaking during a conference call Tuesday, Kreis said he anticipates it will be difficult to access top Europe-based Americans for qualifying. FIFA does not require that clubs release players to under-23 teams, which compete in qualifying and are the bulk of men’s Olympic soccer. FIFA extended the age limit by a year, keeping the group for qualifying limited to players born on or after Jan. 1, 1997. Each team reaching the games in Japan can supplement its roster with three players over the age limit.

Top Americans are not expected at qualifying, with clubs expected not to make available Christian Pulisic, Weston McKennie, Tyler Adams, Josh Sargent and Gio Reyna. All are regulars in league play this season.

"It’s always difficult with the European clubs because of their season, because of the extended travel that it takes for the players to get there and back, but also because the tournament is essentially a 12 day to two-week process and then we need some time with the players to prepare them,” Kreis said.

The U.S. failed to qualify for the 2012 and 2016 Olympics, a slowing development pipeline that contributed to the Americans not reaching the 2018 World Cup.

Kreis hopes to get some Europe-based players. Those not regulars for their clubs appear to be more likely to be available.

“I don’t think that we'll make some requests that we know for sure we’re going to get noes on,” he said. “But anybody that falls into what we think would be the 10 to 15% chance maybe category, we’re going to make those phone calls.”

A delay in the Major League Soccer season because of the pandemic may help the U.S. team.

“If the MLS season hasn't started, now there doesn’t seem to be any good reason for any MLS clubs to not release all of their players to us, so we think potentially we have a bigger pool to choose from and then maybe we could have a little bit more time with those players before the actually tournament starts,” Kreis said. “So we’re going to be looking at that possibility, to have a little bit of a longer run-up to the tournament.”