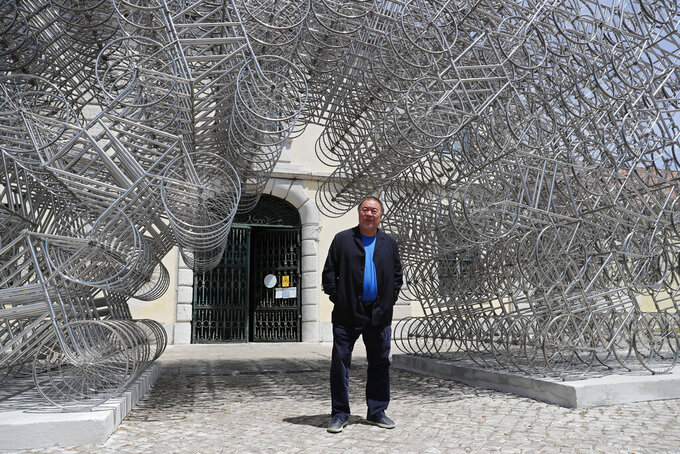 FILE - Dissident Chinese artist Ai Weiwei poses by his sculpture "Forever Bicycles" during a press preview of his new exhibition "Rapture" in Lisbon on June 3, 2021. Ai is one of China's most famous artists, and many regard him as one of the world's greatest living artists. Working with the Swiss architectural firm Herzog & de Meuron, he helped design the Bird's Nest stadium, the centerpiece of Beijing's 2008 Summer Olympics. The stadium will also host the opening ceremony for Beijing's Winter Olympics on Feb. 4, 2022. (AP Photo/Armando Franca, File)

When he was tapped to help design Beijing's Bird's Nest Stadium for the 2008 Summer Olympics, the artist Ai Weiwei hoped the Games and the arena's instantly recognizable weave of curving steel beams would symbolize China’s new openness.

He was disappointed. The Chinese dissident widely regarded as one of the world’s greatest living artists has repeatedly described the stadium and the 2008 Olympics as a “fake smile” that his native country presented to the world.

Now the Bird’s Nest is about to host the Feb. 4 opening ceremony for the Winter Olympics, and Ai expects more of the same.

Even before his fame landed him the design job working with a Swiss architectural firm, Ai had been an unrelenting critic of the Chinese Communist Party. He was jailed in 2011 in China for unspecified crimes and now lives in exile in Portugal. He has also lived in exile in Germany — he still maintains a studio there — and in Britain.

He used his dashed hopes for the Bird’s Nest to illustrate how China has changed since 2008, a time that the Olympics were seen as a “coming out” party for China.

“The entire Olympics took place under the situation of a blockade,” Ai told AP. “For the general public, there was no joy in participation. Instead, there was a close collaboration between the IOC and the Chinese regime, "who put on a show together in order to obtain economic and political capital.”

“China has seen the West’s hypocrisy and inaction when it comes to issues of human rights, so they have become even bolder, more unscrupulous and more ruthless. In 2022, China will impose more stringent constraints to the internet and political life," including human rights and the press, he said.

The Communist Party "does not care if the West participates in the Games or not because China is confident that the West is busy enough with their own affairs.”

Asked if he planned to go back to China, he said he was doubtful. And he dismissed the effectiveness of the West's diplomatic boycott, which means government officials will not attend.