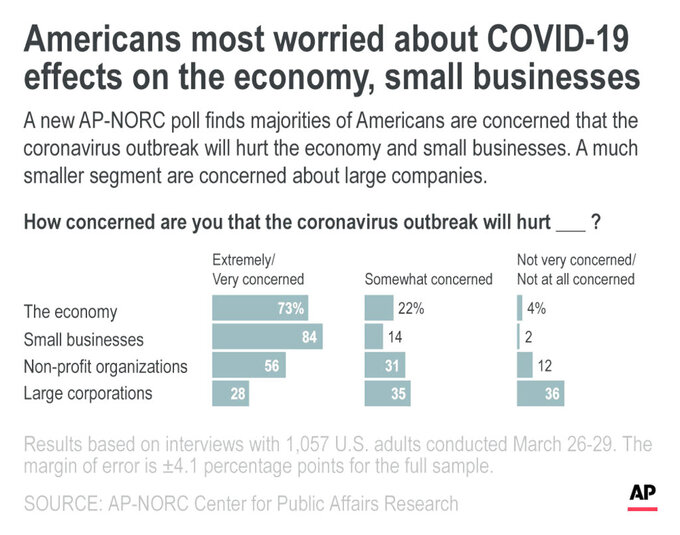 A new AP-NORC poll finds majorities of Americans are concerned that the coronavirus outbreak will hurt the economy and small businesses. A much smaller segment are concerned about large companies.; 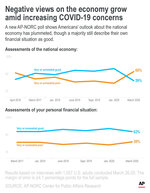 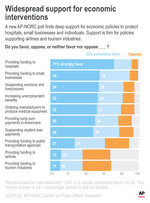 WASHINGTON (AP) — A new poll from The Associated Press-NORC Center for Public Affairs Research finds that positive views of the nation's economy are down dramatically just since January, with 60% of Americans now saying the economy is “poor” after 67% called it “good” in January.

The poll also finds wide support for several measures taken to prop up the economy, especially those aimed at helping individuals, small businesses and hospitals.

Among other findings in the survey, conducted March 26-29 among American adults:

— In total, about half who were employed prior to the outbreak have experienced at least one type of income loss, whether that happened to them or someone else in the household. Layoffs were reported in 33% of such homes, scaled back work hours in 38%, unpaid time off in 27% and a pay cut in 26%. Thirty-three percent of people in households making less than $50,000 a year reported that they or another household member had been laid off, compared with 18% of those making more.

— The poll finds widespread support for many elements of the $2.2 trillion relief package passed by Congress last month. About 9 in 10 favor the federal government providing funding to small businesses and hospitals, while about 8 in 10 favor lump sum payments to Americans, suspending evictions and foreclosures, increased unemployment benefits and suspended student loan payments. About 6 in 10 favor funding for public transportation agencies.

— Those measures enjoy broad bipartisan support, but Republicans are more tepid in their support of some of the measures than Democrats. For example, 67% of Democrats and 38% of Republicans call themselves strongly, rather than just somewhat, in favor of increased unemployment benefits. There are similar gaps in strong support for suspending evictions and foreclosures, suspending student loan payments and making lump sum payments to Americans.

— Americans hold more mixed views on some other relief efforts. While 36% favor funding going to airlines, 32% are opposed and 31% don’t have an opinion. The overall numbers are similar when it comes to funding provided to tourism industries. Republicans are more likely to favor than oppose payments to airlines, 46% to 24%, while Democrats are somewhat more opposed than in favor, 39% to 29%.

— The poll also shows about 8 in 10 Americans are in favor of using emergency powers to order private manufacturers to produce medical equipment. Eighty-four percent of Democrats and 78% of Republicans favor taking that step.

The AP-NORC poll of 1,057 adults was conducted March 26-29 using a sample drawn from NORC's probability-based AmeriSpeak Panel, which is designed to be representative of the U.S. population. The margin of sampling error for all respondents is plus or minus 4.1 percentage points.