AP PHOTOS: No concealing highs and lows of Olympic pursuit 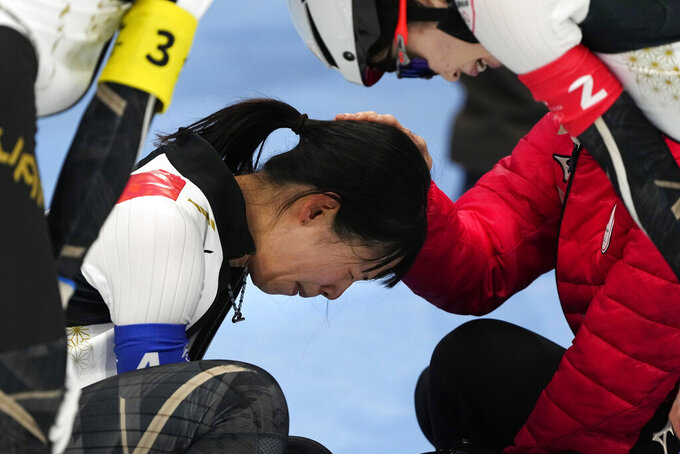 Nana Takagi of Team Japan is comforted by teammates after falling during the speedskating women's team pursuit finals at the 2022 Winter Olympics, Tuesday, Feb. 15, 2022, in Beijing. (AP Photo/Ashley Landis)

BEIJING (AP) — They come for glory. Sometimes, they get agony instead.

For athletes in the key moments of their Olympic quest, it's more than most can muster to withhold a reaction when they find out whether all their work has paid off.

Victory, of course, feels good as gold. Easy to see that on the shouting face of Finnish cross-country skier Iivo Niskanen, winner in the men's 15 kilometer. Or speedskater Hwang Dae-heon of South Korea, looking skyward after crossing first in the men's 1500 meters.

Defeat is every bit the opposite, and Japan's Nana Takagi knows both well. The defending Olympic champion crashed twice at the speedskating rink, including at the final in team pursuit — on the last corner, a gold medal in sight. Takagi was reduced to tears by her untimely mistake, collapsing into the arms of one of her teammates, younger sister Miho Takagi.

There was frustration for Mikaela Shiffrin, a two-time gold medalist Alpine skier who is 0 for 5 on medals at these Games. Same for U.S. skip John Shuster, the defending champion in curling who groaned into his hand as the Americans fell to Canada in the bronze match.

No anguish was seen wider than that of Kamila Valieva, the 15-year-old Russian figure skater embroiled in a doping scandal during these Olympics. Criticized by her coach moments after a crushing collapse in her free skate, the heavy favorite in the women's program had an emotional breakdown when it was revealed she'd finished fourth.