AP PHOTOS: Taboo in Tokyo, tattoos on display at Olympics 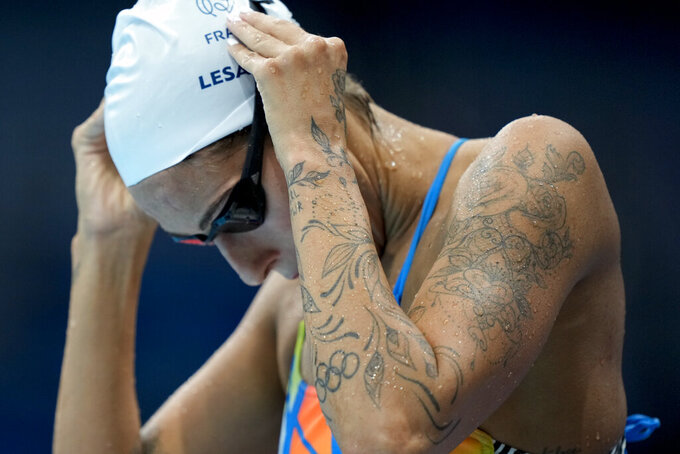 France's Fantine Lesaffre adjusts her cap during a training session at the Tokyo Aquatics Centre venue for the swimming competitions at the 2020 Summer Olympics, Sunday, July 25, 2021, in Tokyo, Japan. (AP Photo/Martin Meissner)

TOKYO (AP) — Taboo in much of Tokyo, tattoos are everywhere at the Olympics.

There’s the lion on British swimmer Adam Peaty’s shoulder. An inspirational message on the arm of Chinese 3-on-3 basketball player Yan Peng. A likeness of Christ the Redeemer on the calf of Spanish boxer Gabriel Escobar Mascunano.

French swimmer Fantine Lasaffre has them on her left forearm, and American shooter Kayle Browning on her right wrist. They’re on Moroccan boxer Abdelhaq Nadir’s left bicep, and on the ankle of Canadian gymnast Shallon Olsen.

Italian gymnast Vanessa Ferrari has them, too, on the back of her neck — along with ink commemorating previous trips to the Beijing, London and Rio de Janiero Games.

Athletes won't do much mingling with locals at these pandemic-restricted Olympics. If they did, they might not find their body art as welcome. Tattoos remain stigmatized in Japan, where those with them are commonly banned from beaches, gyms, pools and elsewhere around Japan.

No such restrictions in the Olympic bubble, though. In the pool, on the beach, at the range — the athletes are redefining what it means to have the mark of a champion.