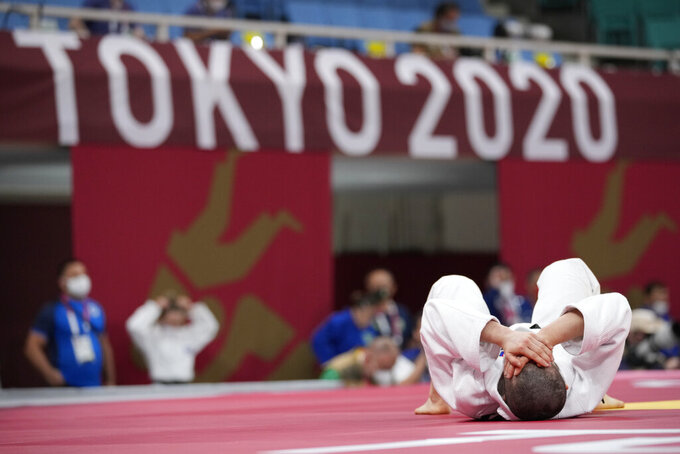 Kang Yujeong of South Korea reacts after her match against Marusa Stangar of Slovenia during the women's 48kg round of 32 judo competition at the 2020 Summer Olympics, Saturday, July 24, 2021, in Tokyo, Japan. (AP Photo/Vincent Thian)

An equestrian hugging his horse. A surfer slumped over his board. A judoka raising her fists in jubilation while her opponent, prone on the mat, buries her face in her hands.

The Tokyo Olympics have focused attention on athletes’ mental health as never before, whether it is Japanese tennis player Naomi Osaka struggling to live up to the hopes of her home country or American gymnast Simone Biles saying she wasn’t in the right “headspace” to compete.

Others cried tears of joy, like Katie Ledecky after winning gold in the 1,500-meter freestyle. Or tears of sadness, like Taiwan’s Yang Yung-wei after settling for silver in the men’s 60kg judo competition. And for some who fought through the sweltering temperatures in Tokyo, like the Chilean women’s soccer team after a loss to Japan, there seemed to be no more energy left to cry.

These Associated Press photos capture the athletes' emotions as they celebrate their wins, mourn their losses or just collapse in exhaustion from the effort.