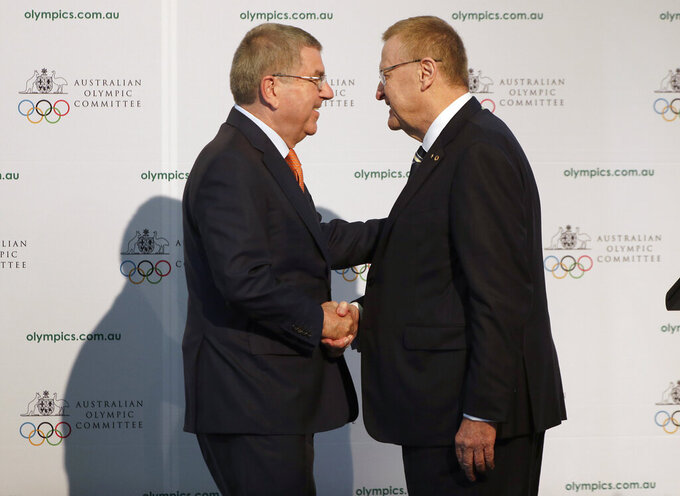 GENEVA (AP) — Did the Australian city of Brisbane just get picked as the host of the 2032 Olympics?

It looked that way Wednesday when the International Olympic Committee named the bid centered on the coastal city in the state of Queensland as its preferred candidate.

The decision by the IOC's executive board puts Brisbane on a fast-track to victory 11 years ahead of the games and before several expected rival candidates have publicly developed their plans.

The 2032 race was expected to include bids from Doha, Qatar -- which is hosting the 2030 Asian Games -- and Budapest, Hungary. Neither has launched a formal bid yet, and Wednesday’s decision will likely be a deterrent for either to enter the race.

“This decision is not a decision against anybody," IOC president Thomas Bach said at a news conference. "This is just a decision in favor of one interested party at this moment in time.”

If Brisbane is eventually approved by the full IOC membership, potentially next year, it would cap the second straight unconventional bidding process for the Summer Games.

Paris and Los Angeles were awarded the 2024 and 2028 editions, respectively, at the same time when in 2017 the IOC changed its rules mid-contest to allow a double award.

Budapest's late withdrawal from the 2024 contest paved the way for Los Angeles being offered the 2028 edition unopposed.

The process was changed again for the 2032 Olympics to speed up the selection. The IOC wanted to move away from two-year bidding campaigns that ended with a host being picked seven years before the games in a contested vote.

These were typically expensive for cities, often ended with rejection of the Olympic brand by voters in local referendums, and invited controversy including allegations of vote-buying.

“This (former process) was not the best procedure, neither not for the future of the games nor for the reputation of the IOC,” Bach said Wednesday, aiming critical comments at consultants and lobbyists hired by candidates.

In 2019, the IOC created panels for each of the Summer and Winter Games to enter into rolling dialogue with possible candidates and even approach bidders. The panels can recommend a host that may now be picked without a contested vote.

“We cannot, I suggest, continue to be damaged as we have in the past,” John Coates, a veteran IOC member, said in 2019 while presenting the new bid process he helped shape at Bach's invitation.

Queensland's quick progress raised questions about possible conflicts of interest for Coates, who has led the Australian Olympic Committee for more than 30 years.

Coates returned to the IOC board last year as a vice president and is viewed as one of Bach's closest allies. He also leads the IOC's oversight of preparations for the postponed Tokyo Olympics this year.

Asked about the perception of Coates's role in creating a process that first benefited Australia, Bach said his colleague was not involved in the board's debate Wednesday.

“This is best practice that whenever a conflict of interest arises you solve it by not participating in related discussions or decisions," the IOC president said.

China, Germany, India, Indonesia and Russia had also worked on possible bids for 2032.

“It’s not a done deal" for Brisbane, said Kristin Kloster Aasen, on IOC member from Norway who chairs the panel that engages with potential Summer games bidders. "But it’s progress made today.”

“The decision to advance the process was taken now given the uncertainty the world is facing at this moment and which is expected to continue even after the COVID-19 health crisis is over,” she said.

The IOC urges hosts to avoid building white elephant projects and control spending which typically overshoots the budget target set during a bid.

The government-backed Queensland bid was made more likely after hosting the Commonwealth Games — a two-week multi-sport event for former British Empire countries — at Gold Coast in 2018.

Kloster Aasen praised the region's existing venues, experience in sports hosting sports and a favorable climate in July and August, when average temperatures in Brisbane, a city of about 2.5 million people, peak at around 22 Celsius (71 Fahrenheit).

The 2000 Sydney Olympics, which Coates helped bid for and organize, was also a popular recent success for the Summer Games.

"We are very clear that we must continue to work hard in outlining our vision for a successful Olympic and Paralympic Games in 2032,“ Coates said in an Australian Olympic body statement.

Coates was to attend a media conference in Brisbane on Thursday morning with Queensland state Premier Annastacia Palaszczuk and other officials.

Peter Conde, chairman of the Australian Institute of Sport, said Australia is well-placed to host a successful Olympics because of a more united sporting system and a sharpened focus on athlete development.

“There is no doubt that the build-up to Sydney 2000 united Australian sport and the AIS, along with our state and territory partners, have taken positive steps over the past few years to further enhance our collaboration,” Conde said.

COVID-19 has impacted sport participation and volunteering, but Sport Australia chief executive Rob Dalton said the next decade was shaping up as one of the most inspiring periods for Australian sport.

“Things have been tough, but we’ve said all along that sport will play a prominent role in lifting the nation’s energy and spirits again, and there are few events that can match the inspiration of a home Olympic and Paralympic Games,” Dalton said.