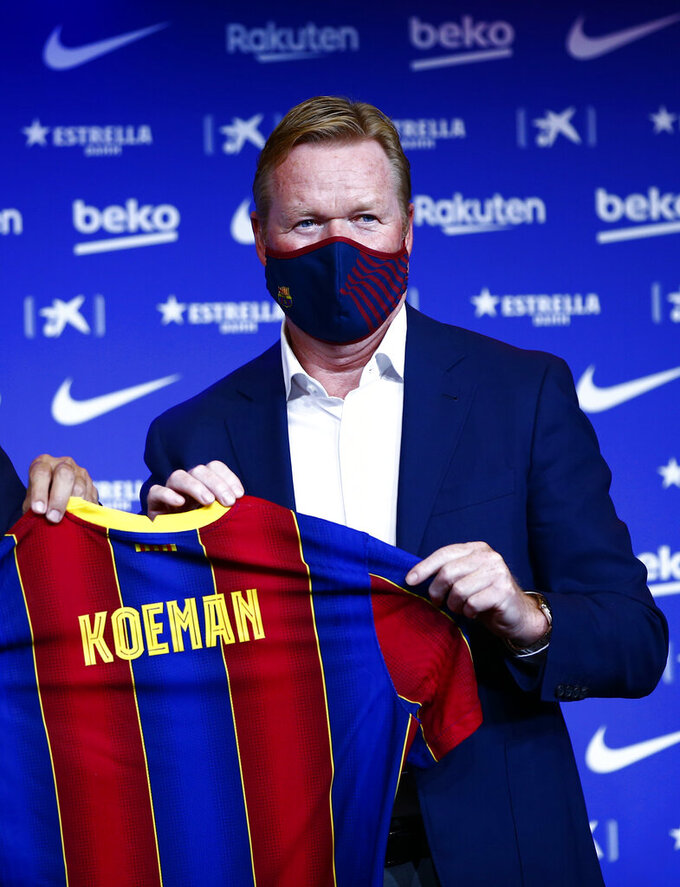 Ronald Koeman holds up a soccer shirt with his name on it during his official presentation as coach for FC Barcelona in Barcelona, Spain, Wednesday, Aug. 19, 2020. Barcelona officially announced earlier on Wednesday a deal with Koeman to become their coach five days after the team's humiliating 8-2 loss to Bayern Munich in the Champions League quarterfinals. Barcelona says the former defender's deal runs through June 2022. Koeman replaces the fired Quique Setien. (AP Photo/Joan Monfort) 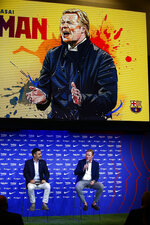 Barcelona is rekindling its links with Dutch soccer.

The Spanish team officially announced Ronald Koeman as its new coach on Wednesday, a day after club president Josep Bartomeu said the Dutchman accepted the coaching offer and only details needed to be sorted out.

“Today is a day to be happy and proud,” Koeman said after being introduced by Bartomeu. “Everyone knows what Barça means to me. It's my home.”

Koeman returns to the club where he thrived as a defender under Dutch great Johan Cruyff in the early 1990s. It was Koeman's extra-time winner in the final against Sampdoria at Wembley Stadium that gave Barcelona its first European title nearly three decades ago.

“The blaugrana legend, hero of Wembley, the man who handed Barça their first ever victory in the European Cup returns to Camp Nou,” Barcelona said after announcing a two-year deal with the coach.

Koeman had been coaching the Dutch national team and had a contract until 2022. He led the team to a runner-up finish in last year’s inaugural Nations League and was set to coach the team at this year’s European Championship before it was postponed because of the coronavirus pandemic.

“We believe in him because we know him very well,” Bartomeu told BarçaTV on Tuesday. "We know how he thinks and how his teams play. We know he has experience, that he played in Cruyff's dream team and that he knows Barça and its way of understanding soccer.”

It was with another Dutch coach, Frank Rijkaard, that Barcelona won its second European trophy in 2006. Rijkaard also won two Spanish league titles in his five seasons with the club before being replaced by Pep Guardiola.

“I'm Dutch and we've always liked teams that keep possession and that plays the game well,” Koeman said. “There's always been a great connection with the Netherlands at this club.”

The 57-year-old Koeman began his coaching career with Barcelona as an assistant to Dutch coach Louis van Gaal in the late 1990s. He had helped Barcelona win four straight Spanish league titles before retiring as a player.

Koeman was a key player for the Netherlands, helping it win the 1988 European Championship and playing in the 1990 and 1994 World Cups.

Koeman’s arrival comes five days after the team’s humiliating 8-2 loss to Bayern Munich in the Champions League quarterfinals. He replaces the fired Quique Setién, who stayed only 25 matches on the job after taking over from Ernesto Valverde in January.

“We will need to change things,” Koeman said. “We don't want the image of what happened the other day. We have to work hard to restore our prestige. We are still the greatest club in the world.”

Barcelona is coming off one of its most disappointing seasons ever, the first without a significant title since 2007-08. It has announced “profound changes” to the first team and a “wide-ranging” restructuring of the club, with new presidential elections set for March next year.

Amid doubts about Messi's future, Koeman said he hoped the Argentina great would stay.

“I want him to tell me what he is thinking,” Koeman said. “I don't think I have to convince him. It would be wonderful to work with him because he wins you games.”

Not directly referring to Messi, who still has a year left in his contract, Koeman said he only wants committed players in his team.

Bartomeu said Barcelona was interested in hiring Koeman when it made a coaching change in January but it wasn’t possible because of his commitment to the Netherlands. The president said Koeman was able to take the job now because there was more time left until international competitions resume, allowing the Dutch federation to more easily replace him.

The Dutch women's national team will also be losing its coach, with the announcement this week that Sarina Wiegman will be leaving after next year’s Olympics to take charge of England.

Koeman previously coached in the Premier League, the Spanish league, the Dutch league and the Portuguese league.

“The Dutchman brings more than 20 years of experience as manager and eight trophies on his CV,” Barcelona said.

His first job as a head coach was with Vitesse in 2000, and he also worked with Ajax, Benfica, PSV Eindhoven and Valencia, among other clubs. Before taking over the Dutch squad, he coached Southampton and Everton in England.