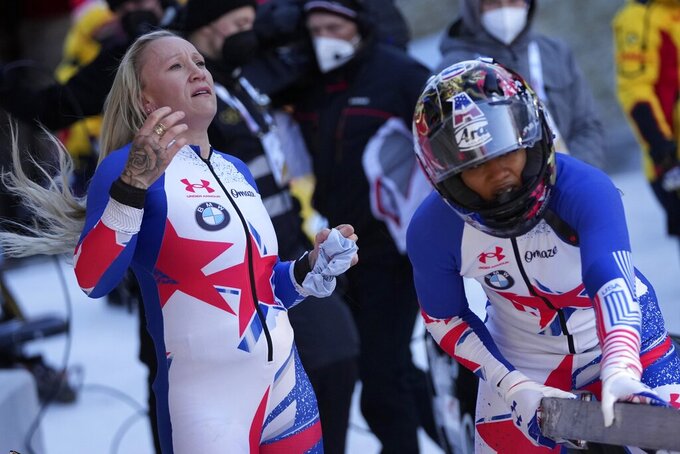 And just like that, the U.S. medal hopes in bobsledding at the Beijing Olympics just got much stronger.

The reigning world champion in both monobob and women’s bobsledding was sworn in as a citizen in San Diego on Thursday, ending her long saga to become an American and have the right to compete for the U.S. at the Olympics.

She does not yet have her passport, but that is likely to be little more than a formality. Without the passport, there was almost no chance the Canadian-born Humphries would have been allowed to slide at the Olympics.

“Most stressful morning ever, but it’s done,” Humphries told The Associated Press from the plane as she was leaving San Diego.

It was a whirlwind finale to the process. Humphries raced in a World Cup stop at Austria this past weekend. She got to Altenberg, Germany for this week's race on Monday, did the two necessary training runs Tuesday that she needed to qualify for World Cup races this weekend, then made the 5-hour drive to Frankfurt for a Wednesday morning flight to San Diego.

Her citizenship meeting was Thursday, and not long afterward she was on a plane headed back to Europe.

“I think she’s super excited,” U.S. bobsled coach Mike Kohn said in a telephone interview from Germany. “She’s had a great couple of years with us. I think she’s going to just really shine now. I think, the uncertainty, it’s held her back a little bit. I think it’s held us all back.”

Humphries — a two-time Olympic champion and three-time Olympic medalist, all won for Canada — lives in San Diego, has held a green card and is married to an American, former bobsledder Travis Armbruster.

She won the right to slide for the U.S. in September 2019 after a lengthy and ongoing dispute with Canadian bobsled officials over claims of verbal abuse, mental abuse and harassment. Humphries left the Canadian team, she said, to seek a safer work environment.

Joining the U.S. team was not an easy decision, especially since she knew it did not come with a guarantee of being able to slide for the Americans at the Beijing Games — but was still a move she deemed necessary for her mental and physical safety.

She could have pursued the chance to slide for another country at these Olympics, but made the decision long ago that if she was going to Beijing she was going as an American.

Which, as of Thursday, she is.

“It was a long journey, this has been a team effort and feels amazing to have the pot of gold at the end of the rainbow," Humphries said.

Humphries had a legal team guiding her, plus got support from the U.S. Olympic and Paralympic Committee and no fewer than five members of Congress — Rep. Mike Levin (D-Calif.) and Sens. Alex Padilla (D-Calif.), Mitt Romney (R-Utah), Mike Lee (R-Utah) and Kirsten Gillibrand (D-N.Y.).

“Kaillie did everything she was supposed to do to earn her citizenship, and my staff and I were very proud to assist her throughout that process, “ said Levin, who represents Humphries' home district.

Humphries' resume is one of the best in the sport's history: five world championships, 54 World Cup medals — 27 of them gold — and she's the only women's pilot to win two Olympic golds and drive to three medals at the games.

Humphries won the world titles last season for the U.S. and has been allowed to compete in World Cup and world championship events for the Americans because different rules apply in those situations. Canada's federation released her in 2019, clearing the path for her to slide for another country. But the Olympic rules are tighter and mandate that, in nearly every instance, an athlete have a passport of the country they are representing.

The International Olympic Committee could have waived that rule, but gave no indication it would do anything on Humphries' behalf.

Now, the U.S. is likely heading to the Olympics with two drivers that can win medals — Humphries and Elana Meyers Taylor. The addition of monobob to the women's Olympic program means female bobsledders have two chances for medals now at the games, like the men have had for decades.

The U.S. has won at least one medal in bobsledding in each of the last five Olympics.

“It's going to inject some enthusiasm into the team," Kohn said. “It's going to let Kaillie be herself again. She's had this on her mind all year. And now such a weight is off her shoulders."