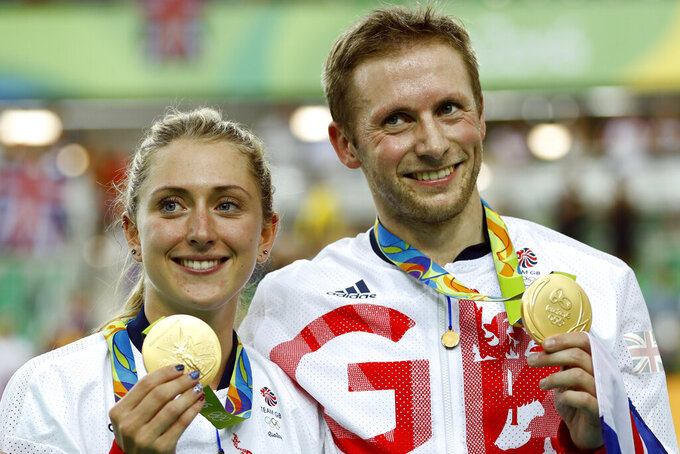 FILE - Laura Trott, left, and her fiance Jason Kenny, both of Britain, pose with their gold medals at the Rio Olympic Velodrome during the 2016 Summer Olympics in Rio de Janeiro, Brazil, in this Tuesday, Aug. 16, 2016, file photo. Britain is hoping to back up consecutive dominant performances in Olympic cycling at the Tokyo Games next month, though much has changed since Rio. Allegations of bullying, sexism and discrimination along with doping charges leveled at its ex-chief doctor have led to leadership changes at British Cycling. Still, such riders at the husband-wife track duo of Jason and Laura Kenny and youngsters such as Tao Geoghegan Hart have the British team eyeing more gold in Japan. (AP Photo/Patrick Semansky, File)

The most successful cycling nation at the Rio Olympics is aiming for more gold in Tokyo.

Britain is vowing to do it the right way, too.

Its cycling team has captured 32 gold medals and 87 overall at the Summer Games, trailing only France for the most of any nation. But much of that success has come during the past two Olympic cycles, when the track cycling team dominated the London Games in 2012 before raucous home crowds and then followed up its performance with 12 medals in Rio.

Much has changed in the intervening years, though.

There have been allegations of bullying, sexism and discrimination within Britain's program, including allegations of sexism lodged by former track cyclist Jess Varnish — and backed by others — against former performance director Shane Sutton.

More recently, former chief doctor Richard Freeman was found guilty of ordering testosterone “knowing or believing” the banned hormone was for an unnamed rider to improve his or her performance. Freeman is appealing the verdict.

“I am wholly committed to us winning in the right way,” Stephen Park, who replaced Sutton in December 2016, said during a conference call with reporters. “We have a responsibility to lead the sport and to do that with integrity. We want to be inspiring the nation when we go to the Olympic Games. We want the whole country to be proud to be British.”

To that end, Britain revealed its lineup for the delayed Tokyo Games on Monday. It brings back plenty of experience with husband-wife track standouts Jason and Laura Kenny trying to add to their massive medal haul and youngsters such as Tao Geoghegan Hart representing a new wave of talent.

“Team GB has a proud track cycling record at the Olympic Games and it’s exciting to see BMX and mountain bike disciplines alongside some very experienced road cyclists selected to the team,” said Mark England, the chef de mission of the British Olympic Association. “The Olympic experience in this team is hugely impressive and I’ve no doubt it will be a valuable asset for those set to make their Olympic debuts in Tokyo.”

Jason Kenny has come out of retirement to lead the way. The track sprinter already has six gold medals and a silver on his resume, and another gold would break a tie with Chris Hoy for most among British cyclists. Another medal of any stripe would put him in a tie with Bradley Wiggins for the most overall.

Kenny's wife, Laura, has won four gold medals of her own. She will be joined by fellow Olympic champions Katie Archibald and Elinor Barker and newcomers Neah Evans and Josie Knight at the velodrome on the Izu peninsula in Japan.

The rest of the track team includes Ed Clancy, who will be trying to win his fourth consecutive team pursuit gold, and fellow endurance riders Ethan Hayter, Ethan Vernon, Matt Walls and Ollie Wood. Jack Carlin and Ryan Owens will compete in sprint events while Katy Marchant is back to contest the sprint and keirin after claiming a bronze medal in Rio.

“We are renowned for our domination in the track events,” Park said, "and while we have a realistic expectation that the rest of the world will be more competitive than ever this year, I am still extremely excited to see every single member of the track squad in the hunt for a medal in Tokyo.”

The difference between this Olympic cycle and those of the past is that Britain has plenty of medal hopes in other disciplines.

The selection leaves out four-time Tour de France winner Chris Froome, who has struggled the past few years to regain his form, along with Hugh Carthy, Alex Dowsett and Luke Rowe.

Tom Pidcock was another option for the road, but he turned his attention to mountain bike and Olympic rules prevent him from racing both disciplines. The under-23 world champion was selected despite recently breaking his collarbone — he's expected to be close to full health — along with Evie Richards for the women's race.

Kye Whyte and Beth Shriever will make their Olympic debuts in the BMX races, while Declan Brooks and world bronze medalist Charlotte Worthington will compete in the new BMX freestyle discipline.

“I’m proud of the focus the support team have made in attempting to diversify our medals, with a real investment going into the BMX and mountain bike disciplines,” Park said. “I’m certain we will see this investment pay off with great performances in Tokyo which will then stand us in good stead leading into Paris 2024.”