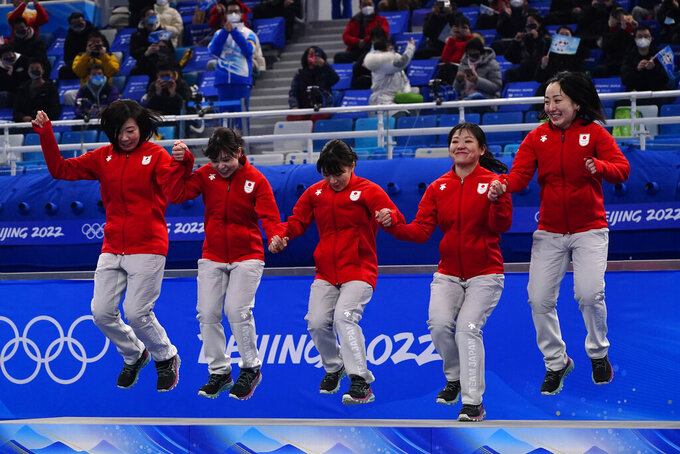 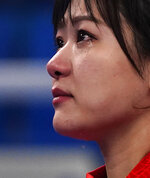 BEIJING (AP) — Twenty years after the “Stone of Destiny" brought the inaugural women's curling gold medal back to the sport's birthplace, Britain is the Olympic champion once again.

Eve Muirhead led the British to their first curling gold since 2002, pulling away with a four-ender in the seventh on Sunday for a 10-3 victory over Japan. It was the most lopsided women’s final in Olympic history.

“It’s been a long time coming,” Muirhead said. “To think, it was 20 years ago when Rhona Martin made history in Great Britain by winning that gold medal. We’ve followed in her footsteps and done it 20 years later. It’s incredible, it really is.”

One day after the British men took silver in a tense, extra-end loss to Sweden, the women led the entire match and essentially clinched it in the seventh when a Japanese miss set up a routine takeout that gave Muirhead's foursome an 8-2 lead.

That brought out out the biggest cheer yet from the British fans in the crowd, including the men’s silver medalists. Martin was also in the Ice Cube curling venue, providing commentary for the TV broadcast.

Japan could only manage one point in the eighth; when Muirhead tallied two in the ninth, Japanese skip Satsuki Fujisawa slid over to bump fists and concede. Another roar arose from the crowd.

Muirhead, who also won a bronze medal at the 2014 Sochi Games and finished fourth in 2018 in Pyeongchang, choked back tears on the medal stand as “God Save the Queen” played and the British flag was raised.

Joining her on the podium were Vicky Wright, Jennifer Dodds, Hailey Duff and alternate Mili Smith — a team that was put together only in November for a last-chance Olympic qualifier after the British stumbled at the world championships and failed to earn a spot there.

It was the second straight medal for the Japanese team of Fujisawa, Chinami Yoshida, Yumi Suzuki and Yurika Yoshida, who were third in Pyeongchang. The Swedish women won bronze on Saturday night, beating Switzerland.

“Despite silver, it is indeed a meaningful medal for Japan,” Suzuki said.

Women’s curling was a demonstration sport at the 1998 Nagano Games and made its official Olympic debut four years later in Salt Lake City. Martin won the inaugural gold with a last-shot draw to the button, known in Britain — and especially Scotland, where the sport and all the British curlers were born — as the “Stone of Destiny.”

But since then, the country has only made one appearance each on the men’s and women’s podiums, with Muirhead winning bronze alongside three different teammates in 2014.

“Twenty years ago is a long time ago, right?” said Nigel Holl, the head of the British curling federation. “We all remember Rhona’s performance and that last stone with real fondness. But it’s about time.”

Both teams in the final had completed the round-robin — and, they thought, their Olympics — when Sweden beat South Korea in the final preliminary match to create a three-way tie for the last two playoff spots.

It was settled by the second tiebreaker: the distance from the button in a pregame, two-throw challenge. Britain and Japan finished eighth and ninth in to edge Canada, which was last in the 10-team field.

Japan beat top-seeded Switzerland in the semifinal. The British advanced despite giving Sweden four points in the first end of their playoff game.

“Nobody likes to do it the easy way, do they? We thought we did it the tough way” Muirhead said with a laugh. “We just didn’t give up. And I think that shows the incredible strength of this team.”

Britain picked up two points in the first end and led 4-2 in the seventh when Fujisawa attempted a fairly routine hit-and-stick with her last throw that would have left two Japanese stones in the scoring area and made it difficult for Britain to eliminate them both with its last rock.

Fujisawa made the hit but rolled the shooter out of the house. Muirhead easily picked off the lone Japanese rock, leaving four of Britain's on target.