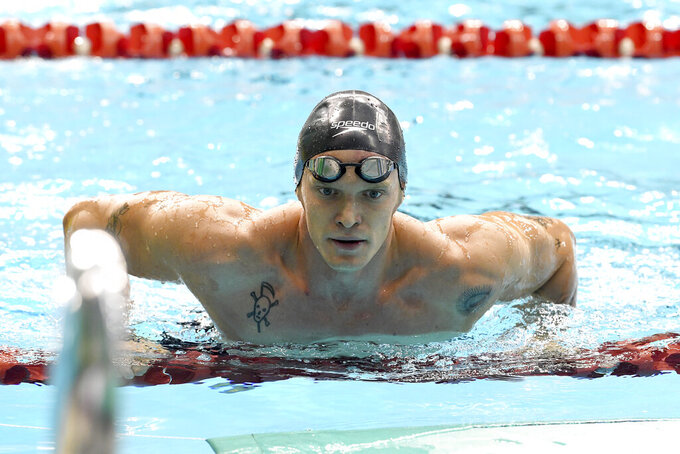 Cody Simpson rests after swimming in the Men's 100-meter Freestyle Heats at the Australian Swimming Trials for the Tokyo Olympic and Paralympic qualification at the SA Aquatic and Leisure Centre in Adelaide, Australia, Tuesday, June 15, 2021. Olympic champion Kyle Chalmers and singer Simpson were listed side-by-side in the promotional billing for a documentary series series ahead of Australia’s Olympic swimming trials. (Dave Hunt/AAP Image via AP)

ADELAIDE, Australia (AP) — Olympic champion Kyle Chalmers and singer Cody Simpson were listed side by side in the billing for a documentary series being promoted ahead of Australia’s Olympic swimming trials.

On the result lists for the 100-meter freestyle Tuesday, the names were a long way apart.

Chalmers led the morning preliminaries and comfortably won the night final in 47.59 seconds to ensure he'll get the right to defend the gold medal he won at the 2016 Olympics. Chalmers, who had surgery on his left shoulder last November, also won the 200 free on the weekend.

Simpson, who has put his music career on hold while concentrating on swimming at his first Olympic trials, finished 23rd in the rankings among the 92 swimmers who competed in the preliminaries. Still, his time of 50.22 was a personal best. And his preferred event — the 100 butterfly — is in two days.

“I wanted to just get up and do something before the 100 ’fly otherwise I would be waiting around all week,” Simpson said after his first taste of competition at the trials. “Just being around all these athletes ... I love this, I really want to do this for a while.

“My goal this meet would be to try to make that final in the 100 ’fly, that would be nice. As long as I’m improving, that’s all I can really ask for.”

Simpson featured this month in the Amazon original series “Head Above Water” with Chalmers,Bronte Campbell and Ian Thorpe, Australia’s most decorated swimmer and his mentor.

He cut short a promising junior swimming career when he moved to the U.S. in 2010 to pursue his music. Simpson concedes he probably is a better prospect for the 2024 Paris Olympics.

In the 200-meter breaststroke, Zac Stubblety-Cook set a Commonwealth record of 2 minutes, 06.28 seconds to secure his spot at the Tokyo Games.

Brianna Throssell won the 200-meter butterfly in 2:07.63, edging 17-year-old Elizabeth Dekkers. Maddie Groves, who won silver in the event at the Rio Olympics, sparked controversy last week when she withdrew from the trials after social media posts condemning “misogynistic perverts” in the sport.

She posted later Friday on Instagram to say her decision to withdraw from Olympic selection was not based on a “singular incident" and was partly because of the COVID-19 pandemic, which has already delayed the Tokyo Games by 12 months.

“If starting this conversation will save just one young girl from something like being told to lose weight or diet, not going to the Olympics will have been worth it,” Groves said.

Swimming Australia said it had tried to open dialogue with Groves since December but "unfortunately at this point we have not been able to have a direct conversation with Maddie to understand exactly what her concerns are, who the people involved are, so that we can investigate it and deal with it.”

The national governing body said it would established an independent, female-led panel to investigate issues relating to the experiences of women and girls in swimming.