Chances fade for banned runner to race at Olympic trials 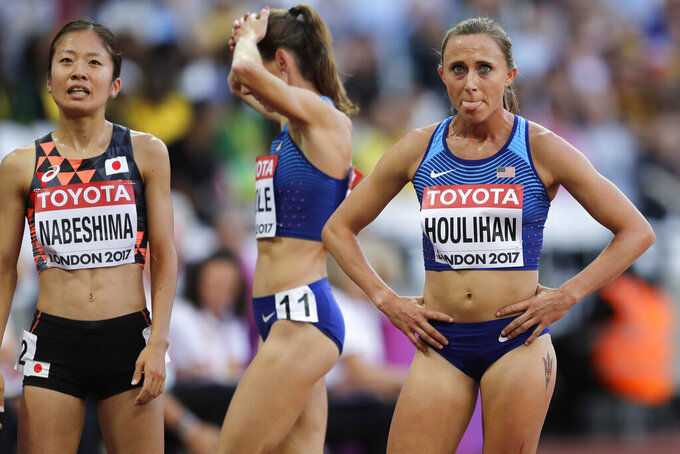 FILE - United States' Shelby Houlihan, right, reacts after finishing a women's 5000m heat during the World Athletics Championships in London, in this Thursday, Aug. 10, 2017, file photo. Banned runner Shelby Houlihan is in the lineup and will be allowed to run at U.S. Olympic track trials while any appeals she files are pending. The American record holder at 1,500 and 5,000 meters, Houlihan is on the start list for Friday’s, June 18, 2021, 5,000 preliminaries. (AP Photo/Tim Ireland, File)

The developments capped a whirlwind day that began with USATF saying it would not bar the American record-holder at 1,500 and 5,000 meters from running in Friday's preliminary heats until she had exhausted every appeal.

USATF stood by that premise at the end of the day, as well, but said it was comfortable taking Houlihan off the start lists since it had received official word from the Athletics Integrity Unit, which conducted the test that led to the suspension, that Houlihan had been banned for four years.

“Process is important, particularly when individuals' careers and lives are at stake,” USATF CEO Max Siegel said. “The letter from the AIU, received tonight, formally notifying us of the consequences of the decision is welcomed and, in line with our processes, we will act accordingly.”

Earlier this week, the Swiss-based Court of Arbitration for Sport upheld Houlihan’s four-year ban for testing positive for trace amounts of the performance enhancer nandrolone.

She blamed her positive test on a pork burrito she ate 10 hours before a test in December. Contaminated meats have led to positive tests in other cases, many of which have been dismissed. But Houlihan did not receive any leniency, and her ban would keep her out of the upcoming Olympics and the 2024 Games.

There remains a sliver of hope for Houlihan, but it is very slim. The 28-year-old would have to appeal to and receive fast-track relief from Switzerland's highest federal court to conceivably be put back in the races.

Her representatives remained quiet about their plans.

But victories in sports cases at the Swiss tribunal are extremely rare, and barring that sort of last-minute reprieve, Houlihan is considered suspended and ineligible to race under international antidoping rules.

“The U.S. Olympic and Paralympic Committee, together with USATF, can confirm that we will adhere to the (international antidoping) code and any CAS decisions that govern athlete participation in sanctioned events,” USOPC CEO Sarah Hirshland said late Thursday.

Though USATF runs the Olympic trials, the USOPC has ultimate say on its rules and who it places on the Olympic team.

Houlihan began the day on the start list for both races, which led to phones ringing off the hook at USATF, USOPC, World Athletics and the U.S. Anti-Doping Agency. The main question: Why was the runner, who shared news of her suspension earlier in the week on social media, still on the start list?

“Despite how frustrated people might be with the CAS decision, she is serving a sanction," USADA CEO Travis Tygart said. "Under the rules, she’s not allowed to compete. It would be illegal for her to do so, unless a court orders differently.”

And so, with only hours to go until the races begin, Houlihan's slim chances of staying eligible rested on her filing an appeal to the Swiss federal court, and the court issuing an injunction that would allow her to compete while it decides whether to take the case.