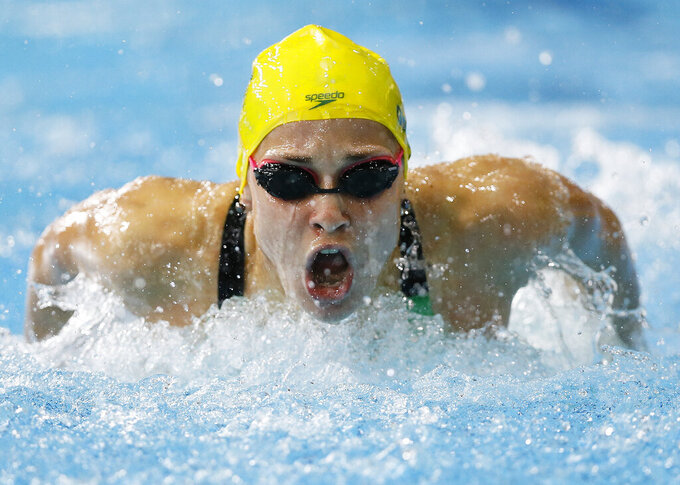 Singer Cody Simpson was dominating attention ahead of Australia’s Olympic swimming trials, until Maddie Groves withdrew from the six-day meet following a series of social media posts condemning “misogynistic perverts” in the sport.

“We have had an ongoing dialogue that has been generated by Maddie through social media. We reached out with her in December 2020 to try to engage with her on these concerns she has,” Perkins told the Australian Broadcasting Corp. “We have done it again now, and unfortunately at this point we have not been able to have a direct conversation with Maddie to understand exactly what her concerns are, who the people involved are, so that we can investigate it and deal with it.”

Groves, who won silver medals in the 200-meter butterfly and a relay at the 2016 Olympics, said she planned to delete her Twitter app after posting: “You can no longer exploit young women and girls, body shame or medically gaslight them and then expect them to represent you so you can earn your annual bonus.

She posted later Friday on Instagram to say her decision to withdraw from Olympic selection was not based on a “singular incident.”

“It's partly because there's a pandemic on, but mostly it's the culmination of years of witnessing and ‘benefitting’ from a culture that relies on people ignoring bad behavior to thrive. I need a break.”

The Olympics, set to open July 23, have already been postponed 12 months because of the COVID-19 pandemic.

“If starting this conversation will save just one young girl from something like being told to lose weight or diet, not going to the Olympics will have been worth it,” Groves added.

Groves tweeted last year that she’d complained about a swimming worker and the way “they stare at me in my” swimsuit, and also expressed concerns about the anti-doping process and the treatment of athletes with long-term illnesses.

Perkins, a two-time Olympic 1,500-meter gold medalist, told ABC television that swimming in Australia was a “proud blended sport” and administrators had done a lot of work in recent years to build a framework to deal with any issues of abuse by making “sure that we have all the right processes for whistleblower investigations, and ensure police matters are dealt with as they need to be."

“There’s always going to be historical things that we need to acknowledge and work toward resolving," Perkins said. "But I and everyone in our sport would certainly be quite challenged by the assertion that there’s a misogynistic culture.”

Veteran swimmer Mitch Larkin, who has been teammates with Groves, said the complaints “broke my heart a little bit."

“I certainly want to find out and get to the bottom of it if she does have some issues,” Larkin said in Adelaide, South Australia, where the Olympic trials start Saturday. “We have got an athlete integrity officer and a well-being officer and she can certainly talk to them as well as sports psychs and really try and dig to the bottom of those issues.

“And if there is a culture issue, we would absolutely love to change it.”

Swimming is Australia’s highest-profile Olympic sport, regularly delivering the most medals for the country. So the trials are a big deal.

Musician and wannabe Olympian Simpson was a successful junior swimmer before moving to the U.S. in 2010 and making it on the music scene.

In a promotional video for a sponsor, he joked about having a vastly different lifestyle now that he was focused on swimming again, saying he used to go to bed at 5 a.m. when he was a performer and now he wakes up at that hour to practice.

The 24-year-old Simpson has featured this month in the Amazon original series “Head Above Water" with Ian Thorpe, Australia’s most decorated swimmer and now his mentor. Simpson is seeded 13th on times in the 100-meter butterfly and 70th in the 100 freestyle, and concedes he probably is a better prospect for the 2024 Olympics. Heats for the 100 free start Tuesday.

Kyle Chalmers, the reigning Olympic champion in the 100 free, and Bronte Campbell are also part of the Head Above Water series, but are more likely to star in the pool.

Chalmers has had to overcome a serious shoulder injury which required surgery last November, but said he’d give himself full marks for fitness by the time he starts racing at the trials.

“I have to believe that I am in the best shape of my life when I race,” he said, “Otherwise I am going to have doubts.”

With two Olympic spots up for grabs in the women’s 100 freestyle, Campbell knows her competition well. Just making the Australian team in this event is like making an Olympic final.

She’ll be competing against her sister, Cate, and Emma McKeon, who have recorded the fastest times this year.

“I have got to find a way to beat at least one of them,” she said.

The Australian team for Tokyo will be announced on the final night of the Adelaide trials.