Clutch hitter: Shiffrin doesn't miss when medals are on line 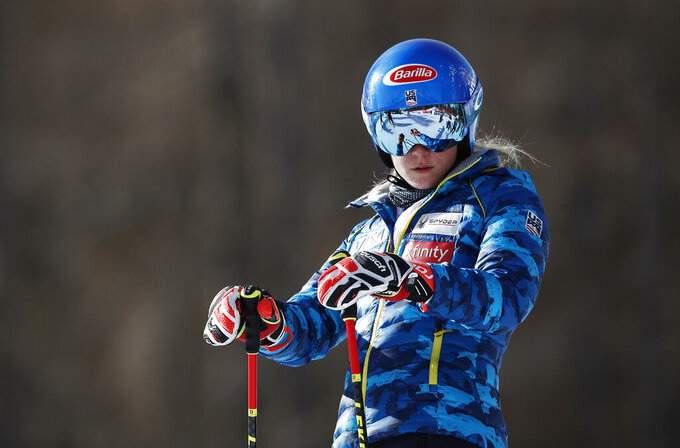 CORTINA D'AMPEZZO, Italy (AP) — If Mikaela Shiffrin were a baseball player, her numbers would make her a post-season MVP.

The American skier won four medals in her four events at the recently concluded world championships and improved her career record at the next-biggest event in skiing after the Olympics to 11 medals in 13 races.

That’s a combined 14 for 18 at major championships — worlds and Olympics.

To put those numbers in perspective, consider Lindsey Vonn’s career results at major championships. While the retired Vonn remains the most successful female skier in World Cup history with a record 82 victories (the 25-year-old Shiffrin has 68 World Cup wins and counting), her haul of 11 medals in 39 races already pales in comparison to Shiffrin’s performance.

So how does Shiffrin do it? Well, beyond her extraordinary skiing skills and years and years of training, it’s all about her mental approach.

Shiffrin, you see, has had the same exact focus for medal races since her very first big event — the 2013 worlds in Schladming, Austria. Or, to be more precise, since halfway through the slalom at those worlds, when she won the world title at age 17 for her first medal.

Shiffrin recently thought back to that race, acknowledging that she was “freaking out” between runs.

After the first leg, Shiffrin sat third behind Scandinavian veterans Frida Hansdotter and Tanja Poutiainen, and had Maria Höfl-Riesch and Tina Maze — two of the greatest skiers of their generation — breathing down her neck in fourth and fifth position, respectively.

Shiffrin was listening to music on her headphones but having a tough time taming her nerves inside the hospitality area when U.S. teammate Steven Nyman walked in and asked her mom and coach, Eileen, what the problem was.

“He said, ‘Alright, alright, alright. Tell her to take her headphones off, we have to have a discussion,’” Shiffrin said. “And we did. And he said, ‘World championships there is one goal. You’re not trying to protect your lead in the overall title or the season titles or anything. You’re not protecting anything. You go for gold, that’s it. … You have everything to gain and nothing to lose. So go for it.’

“And I was like, ‘Huh. That’s really interesting. OK,’” Shiffrin added. “And it didn’t, like, take away my nerves of whether I could ski faster, make up the time difference, or all those different pieces. But it got me psyched up just to do my best. And every world championships since then, whether I’m nervous or I’m feeling great — it doesn’t matter — I have always remembered what Steven said.”

Nyman, a 39-year-old downhiller who has won three World Cup downhills but never a medal at a worlds or Olympics, recalled how he “found it kind of funny that she was so nervous even though she had already had so much success."

“But that’s what makes her unique,” Nyman said via email. “(Marcel) Hirscher had the same attitude. He never felt like he was so good he could cruise. He always played mind games with himself making him believe people were right on his tail.”

Hirscher, the recently retired Austrian who won a record eight straight overall World Cup titles, also once discussed how he so consistently employed his go-for-broke strategy.

As Nyman suggested, Hirscher imagined that he was always being chased.

“If you’re standing in front of a big, big, huge wall, and you have no opportunity to climb up there, and then behind you, there are a hundred crazy dogs who want to eat you up, then you have to go for your life,” Hirscher said in 2013 when asked to explain his approach.

It’s the same attacking mentality that Shiffrin employed when she won gold in combined, silver in giant slalom and bronze in super-G and slalom over the last two weeks in Cortina.

The four medals matched the biggest haul ever by a woman at worlds, with Marielle Goitschel (in 1966), Rosi Mittermaeier (1976), Hanni Wenzel (1980) and Anja Pärson (2007) also having won four medals in a single edition.

Shiffrin’s achievement was all the more remarkable considering that she didn’t race for 10 months last year following the sudden death of her father, Jeff Shiffrin. Her comeback was then slowed by the coronavirus pandemic and a back injury.

Without much training, Shiffrin had raced only sparingly entering the worlds.

“She doesn’t have the dominance this year as years past so it had to be hard for her find that belief to win,” said Nyman, who has known Shiffrin since she was a child. “She is facing new mental arenas currently and it has been fun to watch her navigate them.”

That’s because, whether she has trained or not, Shiffrin is always the skier to beat — which makes her one of the biggest medal threats for next year’s Beijing Olympics.

“I know that I have the capabilities to ski really fast. And if I do, I know it has the capability to win,” Shiffrin said. “But it just boils down to whether I do that well enough, and really what the other girls do. And I can’t control what they do. So all I can really do is go out there and try my best and see what happens.

“So in a way there’s less pressure at world champs than even World Cup races, because you’re not protecting something. But at the same time you know it’s a big event, it’s the one chance to go for gold.”