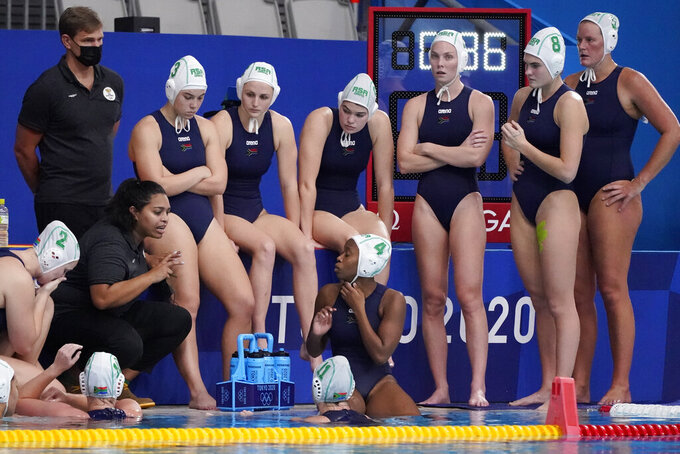 South Africa head coach Delaine Mentoor, kneeling second from left, talks to her team during a 33-1 loss to The Netherlands in a preliminary round women's water polo match at the 2020 Summer Olympics, Friday, July 30, 2021, in Tokyo, Japan. (AP Photo/Mark Humphrey)

TOKYO (AP) — Delaine Mentoor looks at water polo in Africa and sees a continent full of possibility, from Egypt all the way down to her home in South Africa.

Mentoor and her players are hoping their historic appearance at the Tokyo Games is a sign of things to come for their sport, their country and their area of the world. The 28-year-old Mentoor is the first woman to serve as a head coach of a water polo team at the Olympics, and South Africa is the first women's team from Africa to compete in the sport's premier tournament.

Mentoor said increased resources are the biggest key when it comes to growing water polo in South Africa.

“That extra three weeks in some other country playing teams, that extra getting coaches to come down and have training camps there,” she said. “We just need that little bit of an edge because I mean the opportunities are there, the facilities are there.”

“In terms of Africa as a whole, we know that Zimbabwe plays, we know that South Africa plays, we have some Libyan teams, but that's where it ends," Mentoor said. "Egypt has a few men's teams. We need to grow it more. It needs to grow more like it is in other countries.”

In the meantime, South Africa, one of six countries with teams in both the men's and women's tournaments, is having a tough stay in Tokyo.

The men are 0-3 heading into Saturday's matchup with Greece. They have been outscored 64-6.

The women also are winless in three games after they lost 33-1 to the Netherlands on Friday. They have been outscored 83-6.

“Success and result are two very different things,” South Africa women's captain Jordan Wedderburn said. "We're very performance-based, so we look at our small goals that we have for ourselves. Did we defend well? Did we attack well? Did we put pressure on the other teams? We're not looking at the score line.

“I think taking these experiences, getting those little goals, is what we need to do now, and then hopefully we'll see the result in four years' time, eight years' time as we develop our program in South Africa.”

In the pool, the world's water polo powers are rolling over South Africa. But when they get out of the water, they are cheering for the South Africans and what it could mean for the sport.

Many of the same countries compete at the Olympics every four years, and expanding out of water polo's traditional pockets of interest in Europe and the United States could be a big development.

“I really think it's super important,” the Netherlands' Maud Megens said. “I (would) love water polo to be a worldwide sport, and I think they're advocating for all the little girls in South Africa and Africa to start playing water polo. I think that's always good for a sport. The broader, the better.”

That is what Mentoor believes as well — on multiple fronts. She also is looking for some company among the head coaches at the Olympics.

“I can't wait to be coaching poolside alongside another female,” she said. “I mean looking over and just, that for me, that's growth. ... There should be more of us, because the talent is there. I mean some of them have played here, so where are they now? They should be here.”