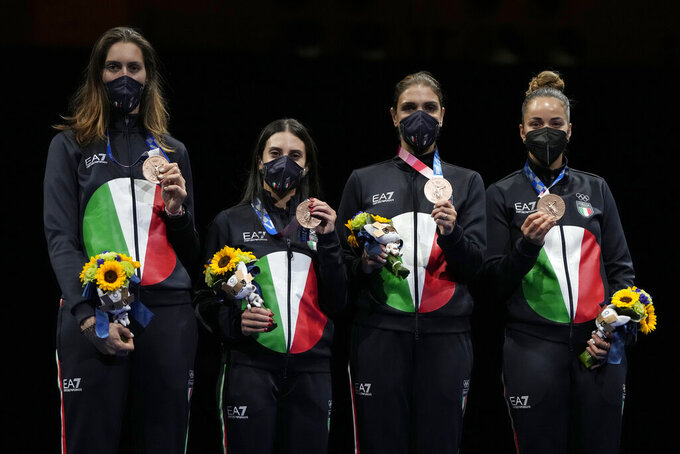 Bronze medalists from Italy celebrate on the podium of the women's Foil team final at the 2020 Summer Olympics, Thursday, July 29, 2021, in Chiba, Japan. (AP Photo/Hassan Ammar)

Martyanova rolled her ankle early in the team foil final at the Olympics on Thursday, but stayed in the contest and contributed 14 points to win gold alongside Inna Deriglazova and Larisa Korobeynikova. The Russians beat France 45-34.

Martyanova, who had her ankle bandaged and treated with an ice pack, needed her teammates’ help to walk to the podium and back again.

“Emotionally it was very hard. I didn’t know what to do," Martyanova said, adding that she worried about letting the team down if she didn't continue. "I had to just stand up and do everything,”

She left the arena in a wheelchair.

Deriglazova won her second medal of the Tokyo Games after finishing runner-up to Lee Kiefer of the United States in the individual foil competition. It's her fourth career Olympic medal.

The Russian Olympic Committee team has won five fencing medals in women’s events in Tokyo, two of them gold. France was on the podium in the women’s team foil for the first time since 1984.

“The idea was to go out there and give our best no matter what. We proved in the semifinals that nothing is impossible and that until the end we can come back. It didn’t happen in the final but the spirit was there," French fencer Ysaora Thibus said.

Italy beat the United States 45-23 for the bronze medal to make the podium in the event for a record seventh consecutive Olympics. Italy won in 2012 and was the defending champion because the team foil was off the program at the 2016 Rio de Janeiro Games.

The Americans took an early lead after Nicole Ross beat Arianna Errigo 5-3 in the opener, but the Italians won all eight bouts after that.

The U.S. team of Kiefer, Ross, Jacqueline Dubrovich and Sabrina Massialas had earlier lost to the Russian team 45-42 in the semifinals.

“Hats off to the Italians. They fenced beautifully, they came out very strong," Kiefer said. "All of us feel heartbroken. We feel like we didn’t put our best fencing forward in that last bout, but the whole Games we fought incredibly hard.”