Dolson's Diary: Arriving in Tokyo and meeting the first lady 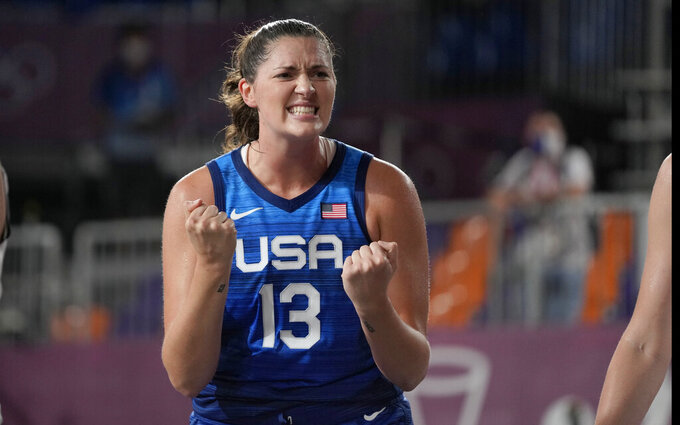 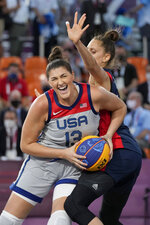 After flying from Las Vegas, we had a couple of days to recover, get used to the time difference and practice to get ready for our 3-on-3 debut.

Obviously everyone heard the heartbreaking news that Katie Lou (Samuelson) got COVID right before we came over from Las Vegas. We wouldn't be here without Lou. It was a rollercoaster few days with that situation, but fortunately Jackie (Young) was able to come in her place. I was so impressed how quickly she caught on and the chemistry we've built. If we didn't have that fourth person this would be a way different game and trip.

Before we started playing games on Saturday, I had the chance to walk with the rest of Team USA in the opening ceremonies. Now that was something really cool. I had watched it on TV over the years, but to be able to actually be a part of it was really, really special.

It was definitely a long day. Before we headed into the stadium, we went to the Olympic village and took photos in front of the rings. Since USA Basketball stays at a separate hotel we don't get the Olympic village experience, but it was cool to walk around it.

Then there was the wait to get into the stadium as the U.S. was one of the last few countries to walk in. There was a funny moment while we were waiting when people started singing happy birthday to another American athlete, When they finished, Draymond Green yelled out that it was Kevin Durant's birthday, which it wasn't, so as many of you probably have seen on social media, everyone started signing happy birthday to KD.

One of the perks of Sue (Bird) being one of the flag bearer for the U.S. — along with baseball player Eddy Alvarez — is that basketball was up front when we walked into the stadium. It's definitely hectic as everyone's trying to jockey to get up front, but basketball and baseball had that honor.

Even with no fans in the stands because of the coronavirus it still was amazing. The Japanese dancers who greeted us were so full of energy and excitement.

We got back to the hotel after midnight and had to get ready for the start of 3-on-3 the next day. I admit I was nervous for the first day of games. I couldn't take a nap since my heart was racing hours before the game against France. We had beaten them in Austria at the qualifier for the Olympics and they definitely wanted to return the favor.

We were able to get the win and afterwards we felt confident and relieved to have gotten the jitters out. Unlike 5-on-5 when you play one game a day, we had another game later that night against Mongolia, who we also beat.

Another thing that is definitely different than 5-on-5 is that you warm up with your opponent before games. That's right they are getting rebounds for you in layup lines and passing you the ball. Some even try and give you a high-five. Definitely different.

I was pleasantly surprised how much the Olympics felt like Austria with the atmosphere of the contests even though there were no fans here. They did a great job of keeping up the energy and since it's outside there was noise going on around us. There were a few hundred workers watching the game and also one really special fan in first lady Jill Biden.

We were told before the game that she was hopefully going to try and make it for the game. After it ended coach Kara Lawson yelled to me to go say hi, so the four of us went over and say hello. We thanked her for coming and supporting us knowing how busy she is. For her to make the time to come see us and put us on her schedule was really cool.

It was an honor to play for her and meet her afterwards.

Now it's onto the next set of games.

Talk to you soon.

Chicago Sky star Stefanie Dolson is checking in periodically from the Olympics. She’s part of the U.S. 3-on-3 team that will take part in the inaugural competition in that event at the Tokyo Games. ___