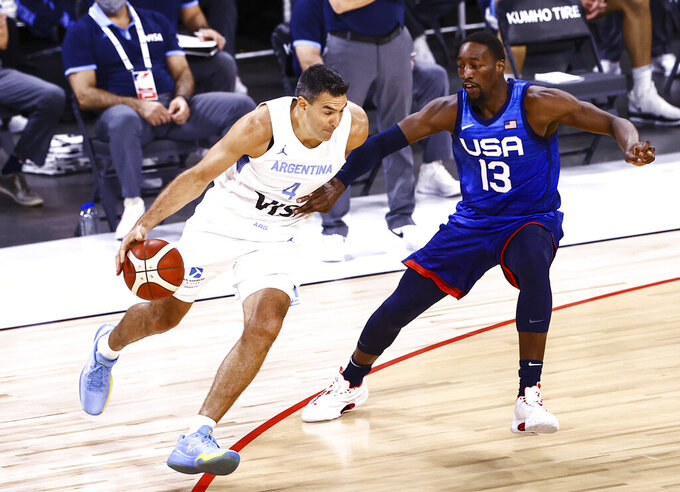 Argentina's Luis Scola (4) drives the ball against United States' Bam Adebayo (13) during the first half of an exhibition basketball game in Las Vegas on Tuesday, July 13, 2021. (Chase Stevens/Las Vegas Review-Journal via AP)

Argentina’s captain is about to play in the Olympics for a fifth time, those appearances spanning three different decades. There are athletes at the Tokyo Games who were not even born — one was five years from being born — when Scola won a gold medal in Athens 17 years ago.

Yes, he’s been around for a while. And there’s the genesis of that daily wish.

“For the love of God, please, please, please -- this is what I tell myself every morning in the mirror -- please do not look old,” Scola said. “That’s all I want.”

There’s some gray hair in there now, he doesn’t run as fast or jump as high as he once did. But on the court, Scola’s game — at 41 years old — is still effective, so much so that he’s quite possibly the most vital ingredient to Argentina’s medal hopes in Tokyo. Scola and Argentina open their Olympic schedule Monday against Slovenia, then face Spain and Japan later in group play.

He’s the coach on the floor, the savvy veteran who has seen just about everything, the mentor to young players, the example of how to play and train. He’s also still able to be Argentina’s go-to player in the big moments, here for much more than a ceremonial role.

“He might be older than me,” Nigeria coach Mike Brown said.

Scola — then a long-haired man, as opposed to the close-cropped look he has now — was the youngest player on Argentina’s team that went to the 2002 world championships, the former name of what now is called the Basketball World Cup.

He’s 10 years older than the next-oldest Argentinean player; Nicolas Laprovittola is only 31. A pair of Scola’s teammates, Leandro Balmoro and Francisco Cafforo, were both 4 when that gold was won in Athens.

And the respect level that Scola, who spent 10 seasons in the NBA, still commands from anyone involved in the game is clear. During one of Argentina’s exhibition games, after coach Sergio Hernandez got done with whatever he was saying in a time-out, Scola called the four other players who were in the game at the time onto the court, gathered them in a half-circle before him and lectured them more for another minute on what exactly needed to be done at that time.

“Luis is a wonderful human being,” U.S. coach Gregg Popovich said. “Obviously, he loves basketball. He’s been playing it for so long. It’s a group of guys, you know, for the last 10 or 15 years, 20 years, whatever it is, they are very close. They love the game, they’ve been a great example of international basketball and Luis is the epitome of that. And I can only continue to be amazed at his love of the game, his love of his teammates, and how much he wants to lead and be there. He and their program are special.”

It’s reasonable to think that this will be the Olympic finale for Scola. But the Paris Games are only three years away and no men's basketball player has ever appeared in six Olympics.

Scola insists that he’s not looking at the Tokyo Games as anything more than the next challenge.

“All I’m thinking is, how can I get in the best possible shape, how can I be in a good position to help my team to win, how can I help those guys to lead.”

And, above all else, don’t look old.