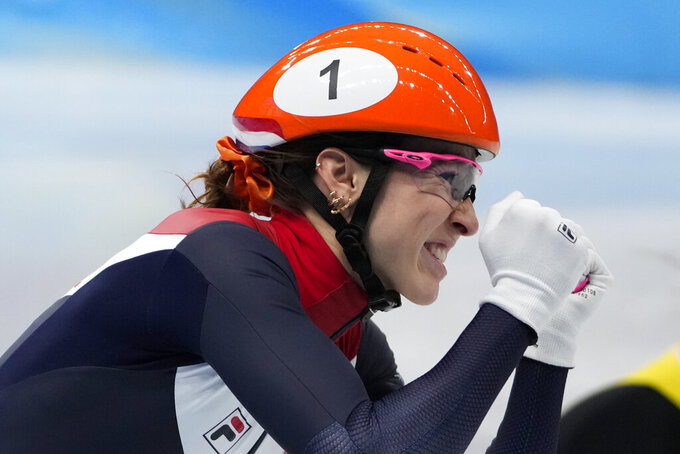 Suzanne Schulting of the Netherlands, reacts after winning the final of the women's 1000-meters during the short track speedskating competition at the 2022 Winter Olympics, Friday, Feb. 11, 2022, in Beijing. (AP Photo/Natacha Pisarenko)

BEIJING (AP) — Suzanne Schulting stood on the podium at the medals plaza accepting a silver in the 500 meters.

“I thought, 'Ooh, I really want to have that gold one,” she said.

“I skated a world record and I was really excited,” she said. “And I said, ‘Oh (damn), I still have to do the semis and then we have the finals.’ I became really confident out there.”

Schulting let out a scream and raised her right fist after crossing the finish line at Capital Indoor Stadium. She's the second woman to defend an Olympic title in the 1,000 after Chun Lee-Kyung of South Korea did it at the 1998 Nagano Games.

“I really wanted it," said Schulting, who leaped onto the award podium and puckishly stuck out her tongue. “I am so happy I got it.”

Choi Minjeong of South Korea took silver, crying on the side of the rink after the race. She finished fourth in 2018, the only time her country had missed the podium since the event's debut in 1994.

“It means a lot for Belgium. We don't get a lot of medals, especially for winter sport,” said Desmet, who was fifth in the 500.

Schulting and Desmet shared a hug.

“I am super proud of Hanne taking the bronze,” Schulting said. “We train together and we're friends. It makes it even more special.”

Arianna Fontana of Italy was penalized for a lane change that caused contact with American Kristen Santos. Both skaters went down and slid on their sides into the padding.

Fontana was chasing an 11th career medal, having already earned two in Beijing. She’s the most decorated skater in Olympic short track.

Schulting won her semifinal and Santos won the other semifinal with a faster time than the Dutchwoman. Santos was in the mix early in the final before Fontana wiped out both of them.

Schulting's victory four years ago at the Pyeongchong Games was the first short track gold medal for the Netherlands, a country best known for its dominant long track speedskaters. She was the first non-Asian winner of the event.

In the B final, American Corinne Stoddard finished third and Maame Biney was fifth. Xandra Velzeboer of the Netherlands won.

In the men's 500, Wu Dajing of China opened defense of his Olympic title by advancing to the quarterfinals on Sunday. Teammate Ren Ziwei, the 1,000 champion in Beijing, also moved on.

China, Canada, Italy, South Korea and the ROC advanced to the A final of the men's 5,000 relay on Wednesday.

China's Li Wenlong and Italy's Yuri Confortola crashed separately during the semifinals of the 45-lap race. After the referee reviewed the video, the host country and the Italians were advanced to the A final.