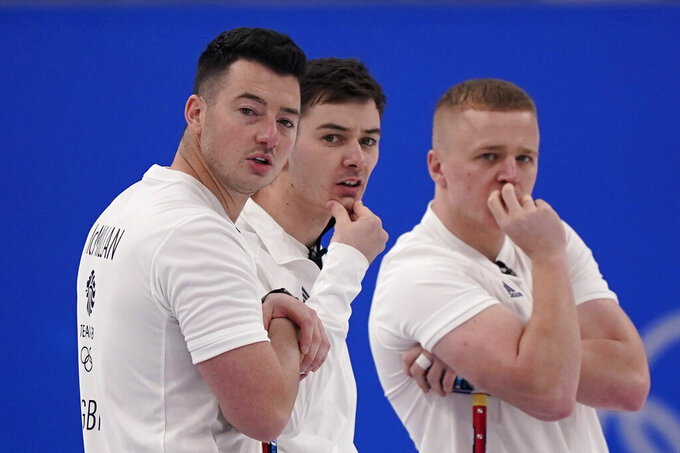 And now, finally, Niklas Edin of Sweden has claimed the only major title missing from a career in which he’s established himself as the most decorated curling skip ever.

Four years after losing in the final to American upstart John Shuster in Pyeongchang, Edin led Sweden to the gold medal on Saturday, beating Britain 5-4 in the first extra-end men's final in Olympic history.

“It feels so crazy, I almost had to ask someone before I came here, ‘We have won, right?’" said Edin, who in four trips to the Winter Games has finished — in order — fourth, third, second and first.

“God, it’s nice. It’s obviously been an incredibly long journey with pretty disappointing defeats,” he said. “It’s been many nice years and a lot of success, and to get this Olympic gold medal now is an extra tick (mark)."

With the podium already set up, and Canada standing by to collect the bronze it won Friday by ending the Americans’ hopes of repeating, Edin took advantage of the last-rock advantage in the first tiebreaker end and put his penultimate stone into the center of the target area.

When British skip Bruce Mouat failed to knock it out on a ricochet, the Swedes had clinched it. They paused — it's not polite to celebrate an opponent's miss — and then let out a yell.

Alternate Daniel Magnusson and the coaching staff hurried down to the ice to join Edin and teammates Oskar Eriksson, Rasmus Wranå and Christoffer Sundgren in the celebration.

“The pressure and the monkey’s off our back,” Edin said. “We’ve done pretty much everything correctly, and now we needed the result to get the receipt that what we’re doing has worked.”

Eriksson, who won the bronze in mixed doubles, is the first person ever to win two curling medals at one Olympics. The Swedish vice skip has four Olympic medals — the only curler in history with more than Edin.

The British took silver — their first medal of the Beijing Games, but not the gold that would have been the first for the sport’s homeland since curling returned to the Olympic program in 2002.

Britain will have another chance against Japan on Sunday in the women’s final.

“At the moment the overriding emotion is disappointment that we didn’t bring home the gold for everyone,” British third Grant Hardie said.

Sweden opened a 3-1 lead with two points in the second end and a steal of one in the third. Still up 3-2, Edin blanked the fifth and the sixth — intentionally taking zero points to retain the last-rock advantage.

The British stole one in the seventh to tie it 3-3, then Sweden scored one in the eighth. Britain threw its last stone through an empty house in the ninth to have the last rock, known as the hammer, in the 10th.

Sweden cleared out the yellow British stones in the final end of regulation, and Mouat delivered a draw to the button to send the match into extra ends.

But the Swedes had the hammer in the 11th, and Edin converted.

“They have won nearly every medal possible in the curling world, so they’re a very impressive team,” Mouat said. “We just had to have a better start and we could have probably won that game. That’s going to sting for a while.”

Sweden picked up another curling medal when it defeated Switzerland 9-7 to win the women's bronze. It was the fifth straight Olympic medal for the Swedish women.