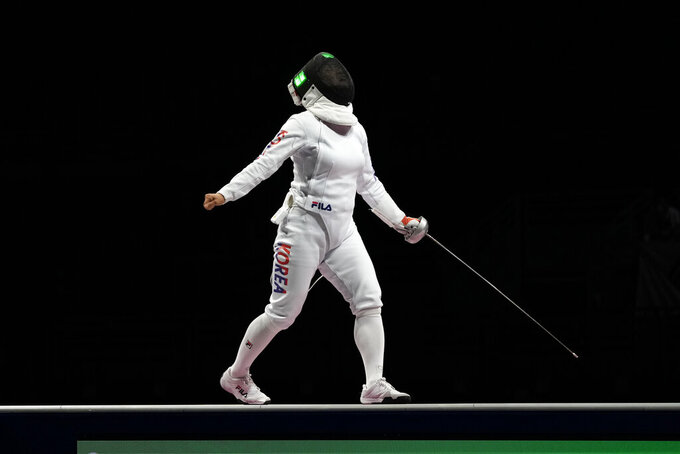 The score was tied 26-26 heading into the final bout between 13th-ranked Katrina Lehis and second-ranked Choi In-jeong.

Lehis, the bronze medalist in the individual event, took a 3-0 lead early in the bout and eventually scored 10 points to take the gold 36-32 in the overall score. That earned her and teammates Erika Kirpu, Irina Embrich and Julia Beljajeva their country's first gold medal in any sport in 13 years and a congratulatory phone call from Estonian President Kersti Kaljulaid.

“We were like one today,” Lehis said. “We were very supportive, the best chemistry we have ever had in the team.”

The victory came five years after Estonia lost the bronze medal contest in the same event.

“I just told myself that I can do it and I have the strength to do it, and I did it,” Lehis said. “I still can’t believe it. I have chills coming all over my body and I still can’t realize yet. It needs some time to realize what we have just done.”

The last time Estonia won an Olympic event was in 2008 when Gerd Kanter took gold in the men’s discus.