Euro backlash as FIFA refuses to expel Russia from football 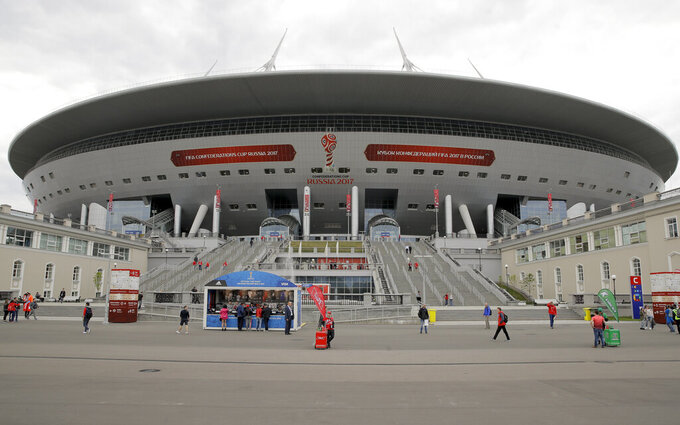 FILE - A general view of the St. Petersburg Stadium prior to the Confederations Cup soccer match between New Zealand and Portugal, in St. Petersburg, Russia, June 24, 2017. The British government led calls Tuesday, Feb. 22, 2022 for the Champions League final to be taken off Russia by European football's governing body to punish its deepening intervention in Ukraine. The showpiece men's game is due to be played in St. Petersburg on May 28 for the biggest sporting event in Russia since the 2018 World Cup.(AP Photo/Pavel Golovkin, file)

LONDON (AP) — FIFA drew a swift backlash from European nations for not immediately expelling Russia from World Cup qualifying on Sunday and only ordering the country to play without its flag and anthem at neutral venues under the name of its federation — the Football Union of Russia.

Protesting against FIFA's response to Russia's invasion of Ukraine, Poland said it would still refuse to play the country in a World Cup playoff semifinal, which is scheduled for March 24.

“Today’s FIFA decision is totally unacceptable,” Polish football federation president Cezary Kulesza tweeted. “We are not interested in participating in this game of appearances. Our stance remains intact: Polish National Team will NOT PLAY with Russia, no matter what the name of the team is.”

The unanimous ruling by the FIFA Bureau, featuring the six regional football confederation presidents, said the Russian flag and anthem can’t be associated with the team playing as “Football Union of Russia (RFU).”

“FIFA will continue its ongoing dialogue with the IOC, UEFA and other sport organizations to determine any additional measures or sanctions," FIFA said in a statement, “including a potential exclusion from competitions, that shall be applied in the near future should the situation not be improving rapidly.”

The decision adopts the Court of Arbitration for Sport ruling before the invasion of Ukraine, punishing Russia's cover-up of the investigation into state-sponsored doping. It meant the Russians had to compete at the last two Olympics as the ROC team — Russian Olympic Committee. FIFA had stalled implementing the ban on Russia competing under the country's name until a potential qualification the World Cup.

The winner of the Russia-Poland playoff is due to host Sweden or the Czech Republic on March 29 to decide who advances to the Nov. 21-Dec. 18 World Cup in Qatar.

Swedish federation president Karl-Erik Nilsson, the senior UEFA vice president, told the website Fotbollskanalen that he was not satisfied with the FIFA decision with a “sharper stance” expected. The Czechs said the FIFA compromise did not change their decision not to play Russia.

FIFA said it had engaged with the three associations and would remain in “close contact to seek to find appropriate and acceptable solutions together.”

Separately, the English Football Association announced that its national teams would refuse to play Russia for the “foreseeable future.” Russia has qualified for the Women's European Championship which is being hosted by England in June.

The English FA said the decision was taken “out of solidarity with the Ukraine and to wholeheartedly condemn the atrocities being committed by the Russian leadership."

The RFU’s president is Aleksandr Dyukov, who is chief executive of a subsidiary of state-owned energy giant Gazprom and also sits on the UEFA executive committee.

In France, the football federation president Noël Le Graët told the Le Parisien daily Sunday that he was leaning toward excluding Russia from the World Cup.

“The world of sport, and in particular football, cannot remain neutral,” said Le Graët, who sits on the ruling FIFA Council and has recently been a close ally of the governing body's president, Gianni Infantino.

A strict reading of FIFA's World Cup regulations would even make the Polish, Swedish and Czech federations liable to disciplinary action and having to pay fines and compensation if they wouldn't play Russia.

In 1992, however, FIFA and UEFA removed Yugoslavia from its competitions following United Nations sanctions imposed when war broke out in the Balkans.

The FIFA Bureau, which is chaired by Infantino, includes UEFA President Aleksander Ceferin.

UEFA on Friday pulled the 2022 Champions League final from St. Petersburg, moving it to Paris, and said Russian and Ukrainian teams in its competitions must play home games in neutral countries. UEFA allowed Spartak Moscow to continue playing in the second-tier Europa League's round of 16.

The Russian president is a keen judoka and attended the sport at the 2012 London Olympics.

There was an abrupt resignation on Sunday from the Russian who is president of the European Judo Union, with Sergey Soloveychik referencing the “heartache that we see the people in brotherly countries die" but backing his country.

“No one doubts that my heart belongs to judo,” he said. “But it is equally true that it belongs to my homeland, Russia. We, judoka, must always be loyal to our principles.”

On Sunday, FINA announced the cancellation of the world junior swim titles which were scheduled from Aug. 23-28 in Kazan. FINA said it was looking for a replacement host for the event.

“FINA remains extremely concerned with the continuing war in Ukraine and following ongoing consultation with athletes and stakeholders from the aquatics family, FINA can now confirm that the 8th FINA World Junior Swimming Championships and FINA will not be holding any future events in Russia if this grave crisis continues,” the FINA statement said.

AP Sports Writer Graham Dunbar in Geneva and Karel Janicek in Prague contributed to this report.