EXPLAINER: What does an Olympic diplomatic boycott achieve? 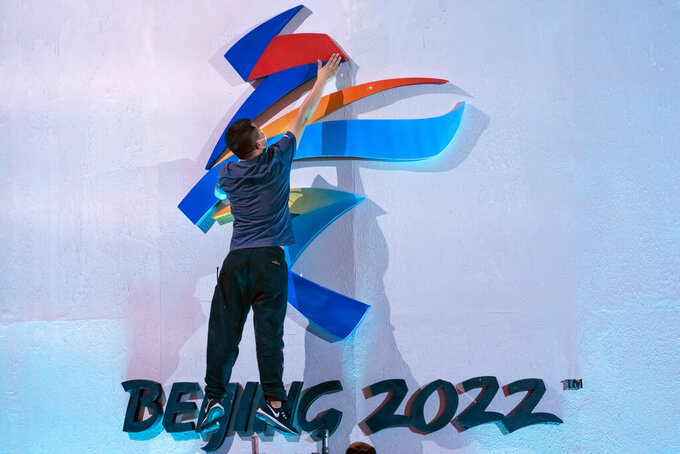 A small cascade of government boycotts hit China on Wednesday, less than two months before the Beijing Olympics open.

The impact of these political weapons on athletes at the games should be close to zero, and viewers should see no difference in their broadcast content.

Their aim is calculated to hurt the pride of host nations such as China, which often have both sports and politics mixed into their motives for staging events as big as an Olympics or soccer’s World Cup.

In Australia, then the United Kingdom and Canada, governments announced their refusal to send officials to the Winter Games being held Feb. 4-20. The move against China started in the United States on Monday.

Those countries are longtime diplomatic allies that want to shine attention on China’s human rights record, and especially the treatment of its Muslim-majority Uyghur people that some call genocide.

The sting will also be felt by the International Olympic Committee, whose leaders have a keen sense of its potential place in world politics even while touting the neutrality it is bound to by the Olympic Charter.

IOC leaders like to burnish the Olympic brand by saying their sports event is the only one to bring more than 200 national teams together in peace and friendship as an example to the world.

Any diversion from the message of global unity is unwelcome.

The Olympic Charter is the code of rules and bylaws that governs the IOC and “sets forth the conditions for the celebration of the Olympic Games.”

Rule 2 relating to the “Mission and role of the IOC” helps explain why any boycott is treated as an affront to its principles.

It includes: “To take action to strengthen the unity of the Olympic Movement, to protect its independence, to maintain and promote its political neutrality and to preserve the autonomy of sport.”

For the IOC, political neutrality should mean not calling out an Olympic host nation for its policies and conduct outside of sports or not connected to staging the games.

“We always ask for as much respect as possible from the political world and the least possible interference on our sports and Olympic world and ideals,” senior IOC member Juan Antonio Samaranch said this week.

The IOC still carries emotional scars from the peak period of more than 100 countries combined staging full boycotts of three straight Summer Games from 1976 to 1984.

The 1980 Moscow Olympics went ahead without the United States and dozens of other teams protesting the Soviet Union's invasion of Afghanistan.

The Soviet bloc and some allies retaliated with a boycott of the 1984 Los Angeles Olympics.

Thousands of athletes missed competing at an Olympic Games four decades ago. None should miss the Beijing Winter Games because of a diplomatic boycott.

Who will stay at home instead of traveling to Beijing next February? Senior lawmakers and diplomatic officials, mostly, when the opening ceremony is held Feb. 4.

There is no diplomatic obligation on heads of state to attend an Olympic Games, and attending a Winter Games is less of a hot ticket than the summer edition.

It is, however, nice to show up for an old ally’s party or build alliances with potential new friends.

Then-President George W. Bush went to Beijing for the opening of the 2008 Summer Games that was supposed to be a coming-out party for a more welcoming China.

In July, first lady Jill Biden led the American contingent to the Summer Olympics in Tokyo.

Going to the games can also create diplomatic issues, as Vice President Mike Pence found at the 2018 Winter Games in South Korea.

Pence found himself in an awkward situation sitting close to North Korea’s delegation at an opening ceremony at Pyeongchang that became a celebration of a relatively short-lived thaw in relations between the Korean neighbors.

The Korean accord had been warmly encouraged by the IOC, seeming to bend its definition of political neutrality to the limit.

China’s reaction to the spreading diplomatic boycott has ranged from “not bothered at all” to “clearly quite bothered.”

The U.S. announcement Monday prompted the Chinese Embassy in Washington to publish in a tweet: “In fact, no one would care about whether these people come or not, and it has no impact whatsoever on the #Beijing2022 to be successfully held.”

In Beijing, the foreign ministry said the Americans were interfering “out of ideological prejudice and based on lies and rumors.”

Australia was dismissed Wednesday as “immature, arrogant and stupid to follow the US” by the Chinese state-run Global Times newspaper. “Countries with rationality would think of the interests of their own people instead of cooperating with the US’ futile stunt.”

Adding piquancy to the current boycott is that it’s being done by reliable recent and future Olympic host nations.

The U.S. and Australia hosting the Summer Games, in 2028 at Los Angeles and 2032 in Brisbane, could provoke Chinese reprisals.

American Olympic officials are also likely to seek IOC support for staging the Winter Games again at Salt Lake City, which was also the 2002 host.

Canada hosted the 2010 Vancouver Winter Games and when London staged the 2012 Olympics, the mayor of the city was Boris Johnson. He announced the U.K.’s diplomatic boycott in its parliament Wednesday as prime minister.