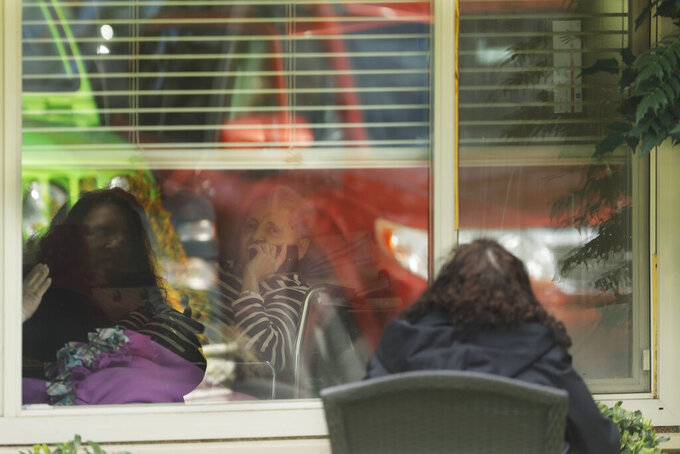 Bridget Parkhill, right, talks on the phone as she visits with her mother, Susan Hailey, center, who has tested positive for the new coronavirus, Thursday, April 2, 2020, at the Life Care Center in Kirkland, Wash. Federal authorities on Wednesday, April 1, 2020, proposed a fine of more than $600,000 for the Seattle-area nursing home connected to at least 40 deaths from the new coronavirus. State regulators and the Centers for Medicare and Medicaid Services conducted an inspection of the facility on March 16, 2020, and found serious infractions that they said placed residents in immediate danger, but a follow-up inspection found that Life Care had at least partially fixed the most serious problems, and Wednesday's announcement said the fine could be adjusted up or down based on how Life Care continues to correct the remaining problems. (AP Photo/Ted S. Warren)

SEATTLE (AP) — Federal authorities have proposed a $611,000 fine for a Seattle-area nursing home connected to at least 40 coronavirus deaths.

State regulators and the Centers for Medicare and Medicaid Services conducted an inspection of the Life Care Center of Kirkland on March 16, finding serious infractions that they said placed residents in immediate danger.

Authorities said Life Care had at least partially fixed the most serious problems by the time they conducted follow-up inspection in last weekend. In a letter to Life Care on Wednesday, CMS proposed a fine of $611,000, but said that could be adjusted up or down based on how Life Care continues to correct remaining problems.

Life Care, which can appeal the fine, did not immediately return an email seeking comment.

The federal regulators said the most serious problems concerned a failure to rapidly identify and manage sick residents during an outbreak of respiratory illness that began by mid-February; a failure to notify the Washington Department of Health about the increasing rate of respiratory infections among residents; and a failure to have a backup plan in the absence of Life Care's primary clinician, who fell ill.

CMS notified Life Care on March 18 that it had 23 days to remedy violations that placed residents at immediate jeopardy before it would be terminated as a Medicare provider. The agency on Wednesday extended that period, saying Life Care must fix all remaining issues by Sept. 16.

Among the remaining issues is whether Life Care has a medical director coordinating care at the facility and whether it is properly protecting patient records.