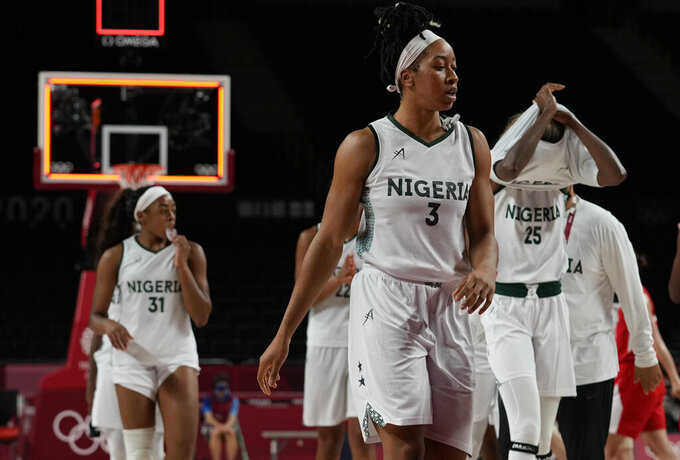 FILE - Nigeria players walk off the court after their loss in the women's basketball preliminary round game against Japan at the 2020 Summer Olympics, Aug. 2, 2021, in Saitama, Japan. FIBA-Nigeria, basketball's world governing body, confirmed Thursday, June 2, 2022, that Nigeria has withdrawn its team from the women's World Cup and warned of "potential disciplinary measures" against the country because of government interference. Nigeria's government announced last month that it was withdrawing all its basketball teams from international competitions for two years while it completely restructures the sport. (AP Photo/Eric Gay, File)

CAPE TOWN, South Africa (AP) — Basketball's world governing body confirmed Thursday that Nigeria has withdrawn its team from the women's World Cup and warned of "potential disciplinary measures" against the country because of government interference.

Nigeria's government announced last month that it was withdrawing all its basketball teams from international competitions for two years while it completely restructures the sport. The sports ministry said the Nigerian Basketball Federation would be dissolved and the decision to withdraw from international competitions was approved by Nigerian President Muhammadu Buhari.

FIBA said it had since been in communication with the Nigerian Basketball Federation in an effort to keep the Nigeria team in the women's World Cup in Australia in September and October, but that didn't work.

“Despite FIBA’s request, it has become clear that against the circumstances created by the government’s decision, the NBBF is unable to confirm its participation in the FIBA Women’s Basketball World Cup 2022,” FIBA said.

Nigeria’s women are the reigning African champions and have won the continental title five times. FIBA said Mali will replace Nigeria at the World Cup.

FIBA also said it would announce "any potential disciplinary measures in due course" regarding Nigeria. The world body had previously warned Nigeria that withdrawing its teams might have consequences that last “well past” the two-year period.

FIBA, like most sports bodies, doesn't allow governments to interfere in the running of national federations and could respond by banning the country from all international basketball events.

The Nigerian women's team disagreed publicly with the decision to withdraw from competitions. Players said in a statement that the move by their government is “taking away all our future competitions, accomplishments and goals to elevate, inspire, and make Nigeria proud.”

It's also set to affect the men's team, which is currently involved in qualifying for the 2023 World Cup.

Nigeria, which is coached by Golden State Warriors assistant Mike Brown, sits top of its qualifying group ahead of the resumption of games in July. If Nigeria doesn't play at next year's World Cup, it won't qualify for the 2024 Olympics in Paris.

The problems in Nigerian basketball center on a leadership tussle at the national federation, which elected two different presidents in parallel elections in January. The government wants to appoint an interim committee to run the NBBF until its issues are resolved, but has also announced its intention to “revamp” all areas of Nigerian basketball, including the domestic league.