FIFA touts billions to be gained from biennial World Cups 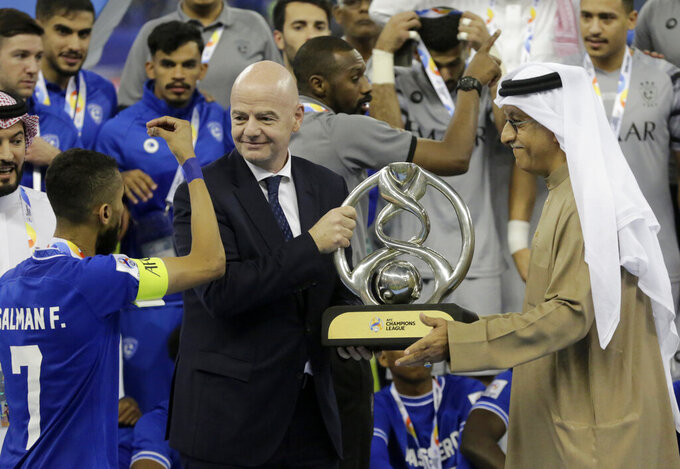 LONDON (AP) — Money talked loudest and clearest when FIFA pitched to more than 200 member countries Monday for its biennial World Cups plan that is opposed by leaders of European and South American soccer plus the Olympics.

Millions of dollars more were promised to every federation from the $4.4 billion in extra revenue that consultants hired by FIFA advised could be earned by doubling the number of tournaments.

Each of the 211 FIFA members were told they could get up to $25 million instead of the basic $6 million they now get during a four-year World Cup commercial cycle currently worth around $7 billion to soccer's governing body.

“This is certainly a new basis for discussion,” FIFA President Gianni Infantino said of a 700-page document he hopes will revive plans to overhaul national-team soccer that were stalled since September by resistance to its key aim.

“We have presented today a situation where we can come out with a solution that benefits, actually, everyone without harming anyone,” Infantino said at a news conference after hosting a 2 1/2 hour online meeting in Doha, Qatar.

The main benefit was clear: $2 billion in projected extra revenue to Europe even as a rebalancing of the global share would increase the rest of the world’s combined take to 40% overall instead of 30% earned from national-team soccer.

Monday's debate in Doha was once intended to lead to a vote on scheduling World Cups every two years for men and women.

It was downgraded to a debate, and a launch for FIFA's hefty feasibility study, after European soccer body UEFA and South America's CONMEBOL threatened boycotts of a biennial World Cup. The International Olympic Committee spoke out against FIFA taking time and attention away from championships in other major sports events.

Infantino insisted he still had “probably the majority” if a vote on biennial World Cups was held tomorrow.

Still, he did not commit to calling a vote when the 211 members next formally meet in person, on March 31 in Doha, and was vague about any future timetable.

“We will take the time that it takes," Infantino said. “It’s not about a precise date, it’s about getting the right decisions for football.”

FIFA aims to drive soccer development and close the gap on European and South American dominance by giving more teams from other regions more chances to play at World Cups.

“Everyone sees that the gap is getting bigger and bigger between a few who have it all and others who have nothing,” said Infantino, a former long-time UEFA official. "We cannot say to the rest of the world – it’s great, football is global, give us your money and watch us on TV.”

FIFA commissioned market research firm Nielsen and the Open Economics organization to undertake research to show the game also could be wealthier by playing its flagship events more often.

FIFA touted a macroeconomics analysis showing GDP gains of more than $180 billion over 16 years — up from an unquantifiable $80 billion now — through World Cups being staged eight rather than four times in that period. FIFA claims that would double the number of permanent jobs created as a result of World Cups to 2 million.

FIFA chief of global football development Arsene Wenger, the former manager of English club Arsenal, has modified one aspect of the plan. National teams could also play in March instead of just June and October as first proposed.

Wenger suggested, without naming UEFA or CONMEBOL, that FIFA's opponents were scared of losing control of their own continental competitions.

“We have to get over this fear,” Wenger said, adding “what I regret is that 90% of this opposition is emotion and not facts and not analysis.”

UEFA's own consultants came to a different conclusion to FIFA. UEFA-funded research from Oliver & Ohlbaum claimed financial damage from the proposed overhaul could cost European soccer billions of euros (dollars).

The IOC is concerned about clashes in the schedule with other sports, the men’s World Cup overshadowing women’s editions of the tournament, and “a further massive strain” on athlete welfare.

The Summer Olympics, like the European Championship and Copa America, are all scheduled for 2024 and 2028 — setting up a direct clash if FIFA expanded beyond its 2026-2030 cycle.

However, Infantino, also an elected member of the IOC, said FIFA's plans are “not a threat to anyone.”

"I don’t believe that I am making myself, or we are making ourselves, enemies,” said the FIFA president, who is due for re-election in less than 18 months' time.