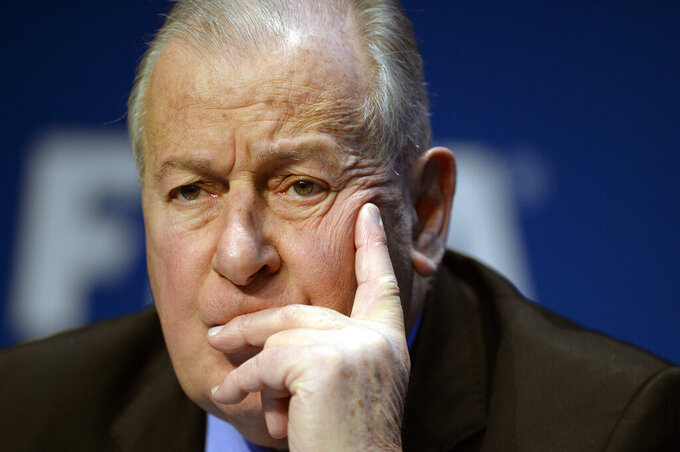 FILE - Francois Carrard, FIFA Reform Committee Chairman, attends a news conference at the FIFA Headquarters in Zurich, Switzerland, Dec. 3, 2015. The former longtime IOC director general Francois Carrard has died, the Olympic body said Monday, Jan. 10, 2022. He was 83. The International Olympic Committee said it was “deeply saddened” to learn of Carrard’s death. The cause was not specified. (Walter Bieri/Keystone via AP, file)

The International Olympic Committee said it was “deeply saddened” to learn of Carrard’s death. The cause was not specified though Carrard was known to have suffered ill health in recent months.

Carrard was one of the most influential sports lawyers in Switzerland and worldwide for more than four decades since he first advised the IOC on legal issues.

Carrard’s former colleagues and protégés continue to handle landmark cases and hold key positions in the legal framework of global sports including at the World Anti-Doping Agency, Court of Arbitration for Sport and international governing bodies of Olympic sports.

Away from sports, the urbane and multi-lingual lawyer was a fixture in Swiss cultural and business life, including as a director of the Montreux Jazz Festival.

“François Carrard was a brilliant man with immense analytic skills and a very wide horizon,” IOC president Thomas Bach said in statement. “He was always a great guide and trustful advisor, and became a personal friend.”

From 1989 to 2003, Carrard was the IOC's director general, serving first under the presidency of Juan Antonio Samaranch then for two years in the transition to the leadership of Jacques Rogge.

In that time he guided the IOC through seven editions of the Olympics, from the 1992 Albertville Winter Games to the 2002 Salt Lake City Winter Games, which had one of the most troubled preparations of any Olympics.

Those final years of Carrard’s official time with the IOC saw it rocked by the scandal caused by some members accepting favors connected to Salt Lake City’s winning bid.

The scandal prompted a series of reforms including the creation of an ethics commission, the introduction of new term and age limits and a ban on member visits to bid cities.

Carrard continued to advise the IOC until his death while heading the legal firm now called Kellerhals Carrard based in the Olympic home city of Lausanne.

One of his last projects was to chair a panel steering governance reforms at world swimming body FINA which were approved last month. He did a similar job for FIFA in 2015 in the aftermath of bribery scandals in the business of international soccer.