Gu talks about goal at Olympics and beyond: 'Glad you asked' 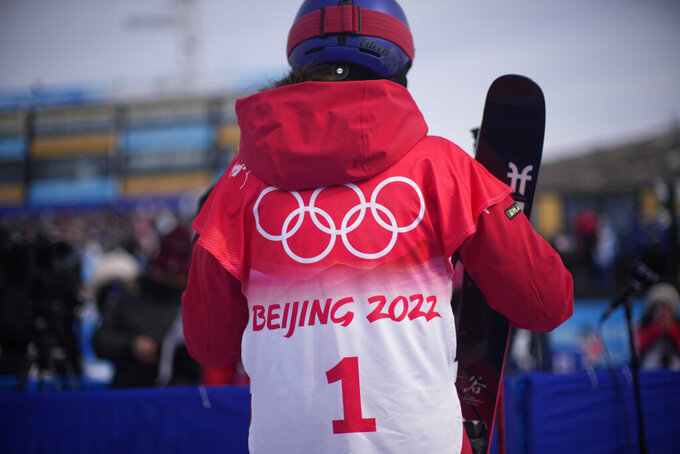 ZHANGJIAKOU, China (AP) — Another Olympic gold medal is hers for the taking. Eileen Gu has bigger goals than that.

The 18-year-old freeskiing star, as easy to spot on magazine covers as on the ski slopes, spelled it all out during a candid Q&A after she breezed through her qualifying round Thursday on the halfpipe.

In the final, Gu will try to add to the gold (big air) and silver (slopestyle) medals she has already won at the Beijing Games. She hasn't lost a contest all season in the halfpipe.

If she comes through, wins the gold and becomes the first action-sports athlete to win three medals at the same Olympics, she's well aware it won't dampen the speculation, or silence the critics who wonder why an American-born teenager would choose to ski for China on her sport's biggest stage.

“I'm glad you asked,” she said to the first of a series of questions thrown at her about her nationality, her mission and her future as she held court in the interview area.

“People sometimes don't know what to do with other people when they're not fitting in a box,” said the skier, whose mother emigrated to the United States some three decades ago. “They say, ‘Is she Chinese? Is she American? Is she a model? Is she a student? Why is she trying to change the world when she’s only 18?'”

Gu is also a great piano player, a damn good skier, a marketing executive's dream — by The Associated Press' unofficial count, she has at least 23 sponsors — and someone unafraid to speak her mind.

She can keep things light — chatting about what she's having for lunch (dumpling one day, pork bun the next), what she writes about in her daily journals (After her slopestyle silver: "I am fresh. I am not tired.") and how she brought her beloved truffle oil to China.

She is far too quick with a story, or a quip, to be cast as — the way some of her critics suggest — a coached-up, pre-scripted purveyor of rote talking points programmed specifically for this moment.

“I'm not trying to solve political problems right now,” she said, offering pushback to those who suggest skiing for China somehow implies her unquestioning approval of the country's government and its policies. “And I'm aware that I'm not able to do everything I want to do in this exact moment.”

She learned to ski in the United States and trained with the American team for years. When it came to figuring out which uniform to wear for the Beijing Games, she thought about it and felt she'd have a greater impact if she could bring action sports to a wider audience in a country with no history on snow.

“My biggest goal is for some girl to be sitting at home watching freeskiing for the first time and thinking, ‘Maybe that could be me some day,’” Gu said. “Maybe she sees someone who looks like her doing it and thinks, ‘Hey, I can do that, too.’”

There are between 9 million and 12 million skiers in the United States, depending on whose statistics you use — and a fraction of those hit terrain parks, the likes of which Gu has been lighting up most of her life, and at the Olympics. China, with quadruple the population, was sitting at 10.8 million skiers last winter, according to a “White Book ” published by the Chinese Economic Publishing House.

But Gu told a story last year of heading to trampoline camps during her annual visits to China when she was younger.

“Back then, I would meet essentially the entire Chinese ski community at once,” she said.

It planted a seed: She would love to see this sport grow in her mother's home country. That the mission stands to make her rich and turn her into a multinational superstar seems like more of a byproduct, by her telling, than the ultimate goal.

“I'm doing what I can, and that's what matters,” Gu said. “If people don’t agree with that, then I encourage them to do what they can and make the world a better place in whatever ways they want to. But don't criticize me.”

Most of this criticism comes from the internet with some shade thrown in by conservative media in the U.S. Fox News' Tucker Carlson: “It’s ungrateful for her to turn her back on the country that not just raised her, but turned her into a world-class skier.”

While, indeed, the U.S. ski team provides funding for young up-and-comers such as Gu, at no time did it foot all the bills. Sponsorships and the Gu family's own funds also helped pay the way. If there's any animus among the U.S. team for what some view as her abandonment of the people who brought her through the ranks, it's not openly visible on the mountain.

“The Olympics put more attention on the nationalistic aspect of our sport,” American skier Brita Sigourney said. “That never used to be a thing.”

Often forgotten amid all the hand-wringing about Gu’s nationality is that the action sports — snowboarding and freeskiing — have traditionally cared the least about what flag goes on whose uniform.

“You go into the dining area with the teams, and you always see the snowboarders from different countries mingling,” snowboarding executive Donna Burton Carpenter said in an interview earlier this winter. “That always felt more like the Olympic spirit than having these nationalistic teams.”

Gu said she feels that vibe every day. The country she skis for is an important thing, of course. But not the only thing.