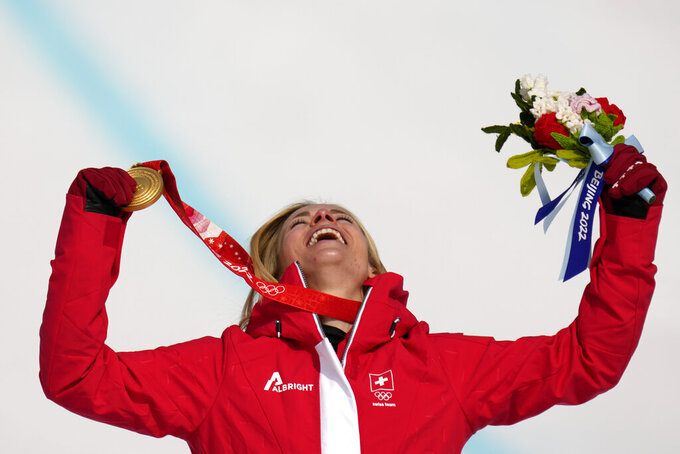 Lara Gut-Behrami, of Switzerland celebrates during the medal ceremony after winning the gold medal in the women's super-G at the 2022 Winter Olympics, Friday, Feb. 11, 2022, in the Yanqing district of Beijing. (AP Photo/Luca Bruno)

BEIJING (AP) — Running one hand through her hair while wiping tears away with the other, Lara Gut-Behrami released a sigh of relief when she finally put that elusive Olympic gold medal around her neck.

Then the freshly crowned super-G champion at the Beijing Games cocked her head back, squinted her eyes as the bright sun reflected off the snow onto her red-and-white Swiss team warmup suit and unleashed a wide smile toward the sky.

Her transformation complete from teenage prodigy to Olympic champion for the first time at age 30, Gut-Behrami could finally reflect on her long and winding career: from her World Cup debut at the age of 16 to her first World Cup victory at 17, an overall World Cup title at 24 and, finally, golds — first, two titles at last season's world championships at Cortina d'Ampezzo, Italy, and now this.

“I had no clue what was going on,” Gut-Behrami said when asked to look back to the start of her career. “I was a kid. So many things I had no idea how to deal with them."

Making it even more meaningful was that the victory came after two consecutive fourth-place finishes in super-G at the Olympics. She also failed to finish her two other races in 2018.

But a few months after the Pyeongchang Games, Gut-Behrami married Swiss soccer player Valon Behrami and settled down into a new life in Italy, where Behrami now plays for Serie B side Brescia.

“I’m just realizing that I ski because I like to ski," she said, “But it’s not my entire life.”

Gut-Behrami won a World Cup super-G on home snow in St. Moritz in December but crashed in another super-G the next day. Shortly afterward, she missed nearly four weeks of racing after contracting COVID-19.

Gut-Behrami finally started feeling better just before traveling to China, and she won a bronze in giant slalom on Wednesday with a blistering second run.

Her performance in the super-G was smooth from start to finish.

On a short course with hardly any significant challenges, Gut-Behrami crouched into her aerodynamic tuck and used her experience to let her skis run through the narrow canyon leading into the finish, where she crossed the line 0.22 seconds ahead of Mirjam Puchner of Austria — who took silver in her first Olympic race.

Two-time Olympic gold medalist Mikaela Shiffrin finished a distant ninth, 0.79 seconds behind Gut-Behrami. At least the American finished this time, after skiing out in both of her previous races in Beijing.

Michelle Gisin, another Swiss skier, finished third, 0.30 seconds behind, for her second Olympic medal after winning the combined four years ago. Gisin, who also had to recover from illness following a diagnosis of mononucleosis in July, cried on the podium.

“I couldn’t train at all,” Gisin said. “I almost couldn’t make it up the stairs all day long. ... I watched the (Summer) Olympics and that was what kept me sane."

Gut-Behrami was widely criticized when she cried in apparent frustration at not having won after earning her first Olympic medal, a bronze in the downhill at the 2014 Sochi Games. She shared the podium then with Gisin’s older sister, Dominique, who tied for the gold with Tina Maze.

“I'm sure my dad was telling me the same thing that he’s telling me now when I was 20, but I wasn’t convinced,” Gut-Behrami said. "I didn’t listen. ... The moment I started to have a real life around skiing ... I started realizing that I have more in life than just being an athlete.

“I don’t think I was waiting for the gold. I think that today I was able to win the gold.”

Meanwhile, defending champion Ester Ledecka failed in her bid to win an unprecedented back-to-back double. She finished 0.43 behind in fifth.

Ledecka became the first competitor to win gold in two different sports at the same Winter Games with her surprise victory in the super-G four years ago. She successfully defended her gold in snowboarding’s parallel giant slalom on Tuesday.

“I still feel a little bit like a snowboarder,” Ledecka said. “I’m a little bit rounder on snowboard with my line. ... I should be more direct here.”

The Italians have dominated the women’s super-G this season, winning six out of the seven World Cup races and occupying the top three spots in the discipline rankings.

But Sofia Goggia, who is still hoping to defend her downhill title on Tuesday, decided not to enter the super-G race as she works her way back from a crash last month.

Federica Brignone in seventh was the highest-placed Italian.