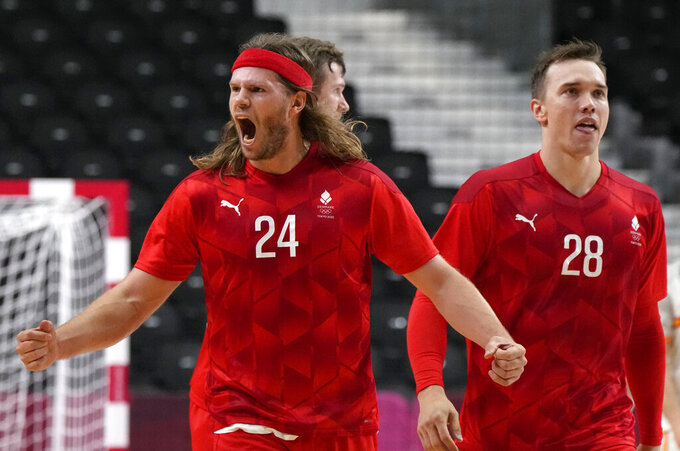 TOKYO (AP) — The Olympic men's handball tournament has become something of a Mikkel Hansen show.

The three-time world championship MVP scored 12 goals to lead Denmark to a 27-23 semifinal victory over Spain. The gold medal game on Saturday will be against France in a rematch of the 2016 final in Rio de Janeiro.

Hansen's 12 goals came off 16 shots and took him to 52 for the tournament, nine more than any other player. No one else in the semifinal scored more than five.

Denmark beat France 28-26 in 2016 for its first Olympic title thanks to eight goals from Hansen, starting an astonishing run of success.

Hansen and Denmark followed up with the world title in 2019 and in January this year and is now back to defend Olympic gold. The only major title which eluded the Danes in that period was the European Championship, won by Spain in 2018 and last year.

France reached the final with a 27-23 win over Egypt to keep alive the prospect of the same country winning the Olympic men's and women's tournaments for the first time since 1984. France started slowly and was 5-1 down before rallying to 13-13 at half time.

French goalkeeper Vincent Gerard made 17 saves from 39 shots, while backup Yann Genty gave up one other goal. Egypt's two goalkeepers combined for eight off 35.

“We are going to play the fight of our careers, and we are going to use all of our strengths in the battle,” Gerard said of the final. “It’s my second final in the Olympics. The first was a defeat. I hope we are going to change that.”

Egypt will meet Spain on Saturday in the bronze medal playoff, aiming to become the first African team on an Olympic handball podium.

The women's semifinals are Friday, with the Russian team against Norway, and France taking on Sweden.