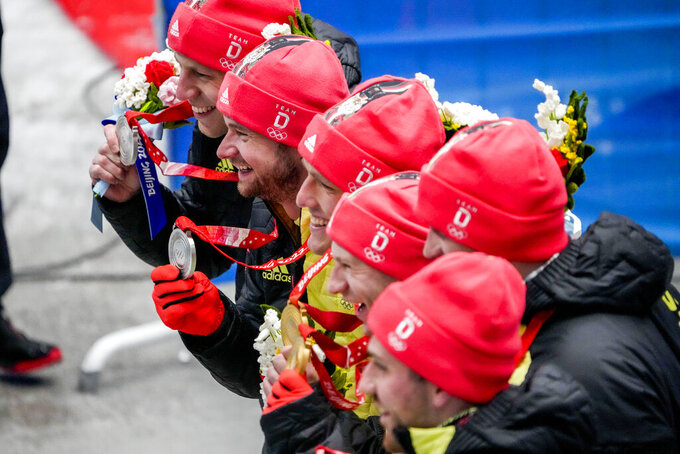 And for the German bobsled team, it also means history.

Germany — unquestionably the world’s sliding superpower — became the first nation to sweep the medals in an Olympic bobsled race on Tuesday, grabbing gold, silver and bronze in the two-man event at the Beijing Games.

Francesco Friedrich is now a three-time Olympic gold medalist, teaming with Thorsten Margis to prevail in 3 minutes, 56.89 seconds. Johannes Lochner and Florian Bauer were second in 3:57.38, and Christoph Hafer and Matthias Sommer held on to finish third in 3:58.58.

Germany now has seven gold medals in sliding at the Beijing Games, more golds than any nation has ever grabbed from the bobsled, skeleton and luge events at any Olympics. The Germans also have 12 medals in sliding events so far in Beijing — technically, another record for any nation participating in sledding sports. East Germany and West Germany combined for 12 medals at the 1976 Innsbruck Games.

“It’s unbelievable,” Lochner said. “We did so much work for four years for this.”

Switzerland was fourth, the team of Michael Vogt and Sandro Michel finishing in 3:58.83. Benjamin Maier and Markus Sammer were fifth for Austria in 3:59.12. And Monaco grabbed sixth, its best finish ever in an Olympic sporting event, with Rudy Rinaldi and Boris Vain completing their four runs in 3:59.14.

But this night, totally and completely, belonged to Germany.

Just like almost everything else has so far at the Yanqing Sliding Center.

“They are so far away from everyone," Rinaldi said of the Germans. “We knew it on this kind of track. The longer the track, the less we have a chance. We knew it. They're all good drivers, good pushers. ... What they're doing is crazy. Sometimes it may be unfair for us, but this is their sport."

Germany won gold in all four luge events, then won gold in both skeleton events. The only time that “Das Deutschlandlied” hasn’t been the national anthem playing when the flags celebrating a new Olympic champion are raised over the track was Monday, when Kaillie Humphries won gold for the United States in the monobob competition.

There are two sliding events left in the Beijing Olympics — the women’s race that ends Saturday, and the four-man event that ends Sunday. Friedrich is the far-and-away favorite to win gold in the four-man race, defending champion Mariama Jamanka was the fastest in Day 1 of official women’s training on Tuesday, and that all means Germany’s medal haul from the Olympic track probably isn’t complete.

“I liked the energy we brought to the start," DelDuca said. “You have to do two race heats on two straight days. I thought we had just as much energy on that last one, if not more, than the first. It felt really good. Hakeem had my back, we believed in each other, we left everything out there and I'm really grateful to be doing this."

Hunter Church and brakeman Charlie Volker were 27th for the U.S., not qualifying for a fourth run. They struggled during Monday’s opening runs — but were much cleaner going down the track Tuesday and now take some positive momentum into the four-man race that starts Saturday.

But right now, nobody at the track has more confidence than Germany.

“A very good feeling for us,” Sommer said. “It’s a team victory … a victory for Germany.”