Hungarian fencer Aida Mohamed to compete in her 7th Olympics 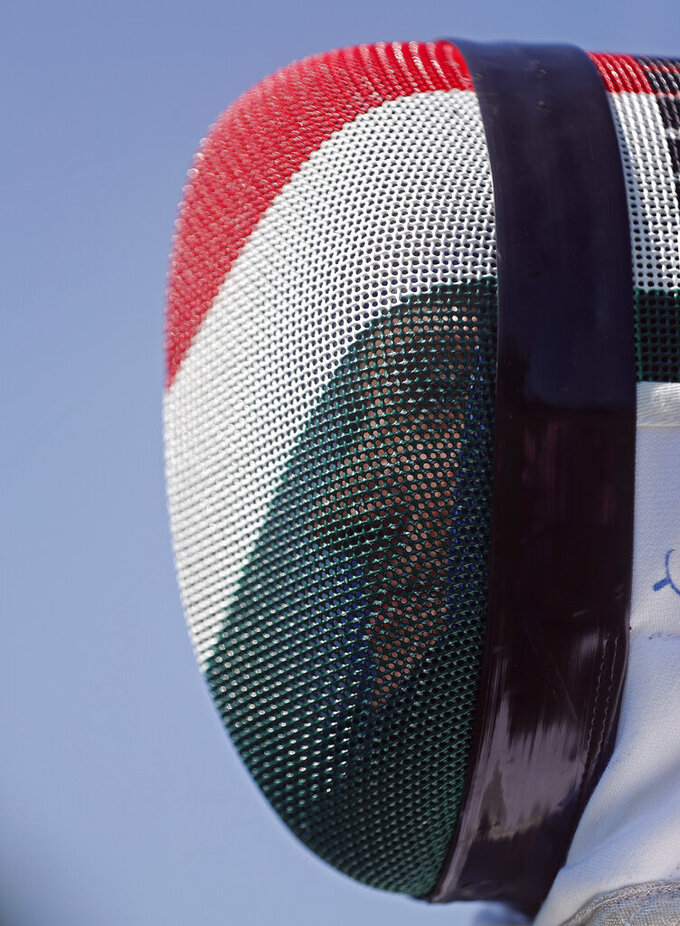 Hungarian fencer Aida Mohamed is seen through her mask during a training session in Budapest's sport park, Hungary, Sunday, June 20, 2021. At the age of 45 Mohamed, born in Budapest to a Syrian father and Hungarian mother, has qualified to compete in foil at the Tokyo Olympics. Her appearance will make her only the 14th woman to have competed in her seventh Olympics. (AP Photo/Laszlo Balogh)

BUDAPEST, Hungary (AP) — Hungarian fencer Aida Mohamed is about to join a very small group of women by competing in her seventh Olympics.

The 45-year-old Mohamed, born in Budapest to a Syrian father and Hungarian mother, has qualified to compete in foil at the Tokyo Olympics. Her appearance will make her only the 14th woman to appear at the games so many times.

Despite making her first Olympic appearance at the 1996 Atlanta Games, she said the experience is anything but routine.

“I’m still nervous and I still want to put (forward) the best performance," Mohamed told The Associated Press from her training gym in Budapest.

Mohamed, who is left handed, competes in foil, using a lighter and more flexible weapon than the rigid épée. She is currently ranked 29th in the world in her category by the World Fencing Federation.

She has earned one silver medal and six bronze in individual foil at world championships, and a team gold at the 2007 European championships. But she has never managed to reach the podium at the Olympics.

While Mohamed will travel with Hungary's women's foil team to Tokyo as an alternate, she may not compete in individual competition. Still, it will give her the record for most Olympic appearances by any Hungarian athlete, man or woman.

“I’m training harder than 10 or 20 years ago, probably because fencing has changed and it’s more athletic,” Mohamed said. "Plus, I have to catch up with the younger ones, so I have to put in more effort than at the Olympics before.”

Mohamed attributes much of her success to her trainer of 35 years, Antal Solti, whom she describes as a father figure and says was as much a mentor to her as he was a coach.

“This is a little bit more than just a coach and student relationship. I can say that it’s like a father-daughter relationship,” she said of Solti, who monitored her grades when she was still in school early in her fencing career.

Raised only by her mother, Mohamed said Solti gave her and other young fencers the strength to tackle challenges both in sports and in life.

“He really paid attention, not only in the sport but in our personal lives. I think that made him very unique,” she said. “When we set up a goal, we always worked hard for it and he was always the one that helped me to achieve it.”

The 72-year-old Solti said his student showed great potential as a fencer even way back when they first began working together in 1985.

“It was already apparent at an early age that she could be successful, and there were immediate results. You could see it right away,” he said.

Hearing that Mohamed thinks of him as a father, he said it “touched me a lot."

“I will tell you honestly,” Solti said. "There is no better thing in the world.”

Hungary has the third most Olympic fencing medals of any country, behind Italy and France, and has earned more medals in fencing than in any other sport it competes in — something Mohamed attributes to a fiery national spirit.

“I think we just have the spirit of fighting and the emotion to do it ... I think that’s why always we succeeded,” she said.

Hungary's first team match in Tokyo will be against Italy, one of the best squads in the world. With the support of her husband, Canadian Olympic fencer Laurie Shong, and their two young daughters, Mohamed said she will do everything she can to bring home her first Olympic medal.

“I'm hoping that I can help the team to victory. That would be the best," she said. "The big dream would be to gain a medal ... I would just like to show my best performance ever.”