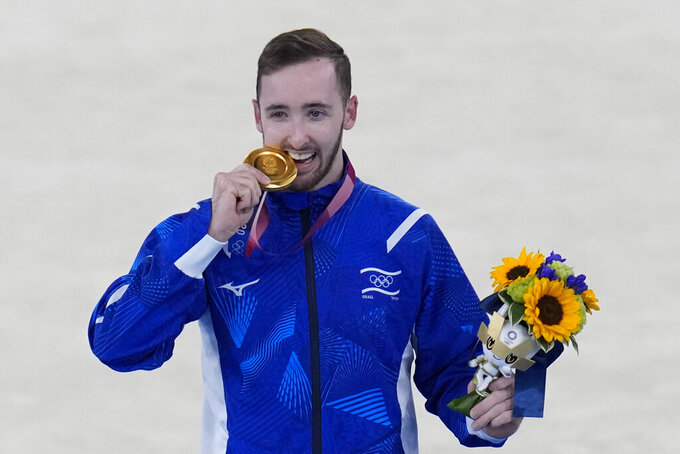 Artem Dolgopyat of Israel, poses after winning the gold medal on the floor exercise during the artistic gymnastics men's apparatus final at the 2020 Summer Olympics, Sunday, Aug. 1, 2021, in Tokyo, Japan. (AP Photo/Gregory Bull)

JERUSALEM (AP) — Artem Dolgopyat fulfilled a lifelong dream when he won a gold medal at the Tokyo Olympics. But back home in Israel, his hopes of trading gold wedding bands with his longtime girlfriend seem to be an impossible dream.

The Ukrainian-born Israeli gymnast was hailed as a national hero for winning Israel's second-ever gold medal — and its first in artistic gymnastics. But the celebrations were tempered after his mother lamented that the country's authorities will not allow him to wed because he is not considered Jewish according to Orthodox law.

“The state doesn’t allow him to marry,” Dolgopyat’s mother, Angela, told 103FM in an interview Sunday.

Her comments touched a raw nerve in this country, which has repeatedly struggled with balancing matters of religion and state since it was founded as a refuge for Jews 73 years ago.

Under its “Law of Return,” anyone with at least one Jewish grandparent is eligible for Israeli citizenship. But while Dolgopyat's father is Jewish, his mother is not. Under “halacha,” or Jewish religious law, one must have a Jewish mother to be considered Jewish.

This discrepancy has resulted in tens of thousands of people, many of them from the former Soviet Union, who live in the country and serve in its army but who are blocked from Jewish rituals such as weddings and funerals.

Israel does not have a system of civil marriage and Israeli law mandates that Jewish marriages must be conducted by a rabbi authorized by the Chief Rabbinate. Christian and Muslim couples must also get married within their faith.

Those who do not meet the Orthodox standards set by the rabbinate — including same-sex couples, interfaith couples, and Israelis not considered Jewish by halacha — cannot get married in Israel. Instead, they must travel abroad to marry.

Attempts to legalize civil marriage have repeatedly foundered due to opposition by politically powerful ultra-Orthodox parties.

Dolgopyat’s mother told the radio station that her son and his girlfriend have lived together for three years, “but they can’t marry. They need to go abroad, but they don’t let him go abroad because he always needs to do sports.”

The Olympic champion, for his part, tried to downplay the controversy. “These are things I have in my heart, it’s not right to talk about this now,” he told reporters in Tokyo.

But Dolgopyat's wedding woes have dominated public discourse, with politicians and a raft of op-ed articles debating the issue of bringing civil marriage to Israel.

A 2019 survey by the Israel Democracy Institute found that almost 60% of Israeli Jews support civil marriage.

“It’s not that Dolgopyat is entitled to marry in Israel because of the rare sports accomplishment he made, rather because he is a citizen in a democratic country," Katya Kupchik, an activist with Israel Hofsheet wrote on the Hebrew news site Ynet. Israel Hofsheet advocates for civil marriages.

“He, like hundreds of thousands of others, ought not have to receive approvals or rejections from the Chief Rabbinate in order to exercise a basic right.”

Conversely, Yishai Cohen wrote in the ultra-Orthodox newspaper Kikar Hashabbat: “I wouldn’t want to live in a country that makes winning a sporting medal the standard for conversion" to Judaism. He said a conversion requires accepting “the yoke of Torah and the commandments.”

Yair Lapid, Israel’s foreign minister, said Monday at a faction meeting of his Yesh Atid party that he “will fight in every way possible so that there will be civil marriage" in order for Dolgopyat and others to marry in Israel.

“It’s insufferable in my eyes that someone can stand on the podium, hear Hatikva, and get a gold medal in the name of Israel, and then not be able to wed here,” he said, referring to the country's national anthem. "It’s a situation that cannot continue, and we will fight for change.”