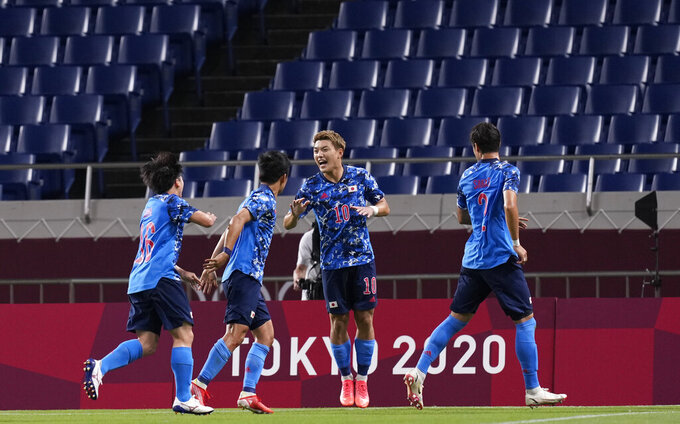 Japan's Ritsu Doan, center, celebrates with teammates after scoring a goal during a men's soccer match against Mexico at the 2020 Summer Olympics, Sunday, July 25, 2021, in Saitama, Japan. (AP Photo/Martin Mejia)

SAITAMA, Japan (AP) — Takefusa Kubo and Ritsu Doan scored in the opening 11 minutes to lead Japan to a 2-1 victory over Mexico in men's Olympic soccer on Sunday.

Kubo took advantage of a hesitation from the Mexican defense to net a powerful shot in the sixth minute. Doan then converted from the penalty spot.

Although Mexico had Yohan Vázquez sent off in the 67th, Roberto Alvarado still gave Mexico brief hope of a comeback by scoring in the 86th from a free kick. Vladimir Loroña had a late header saved.

Japan has a perfect record in Group A after winning both matches at its home Olympics. Mexico is second with three points, ahead of France on goal difference. South Africa is without a point after losing to France 4-3 in the other group game.