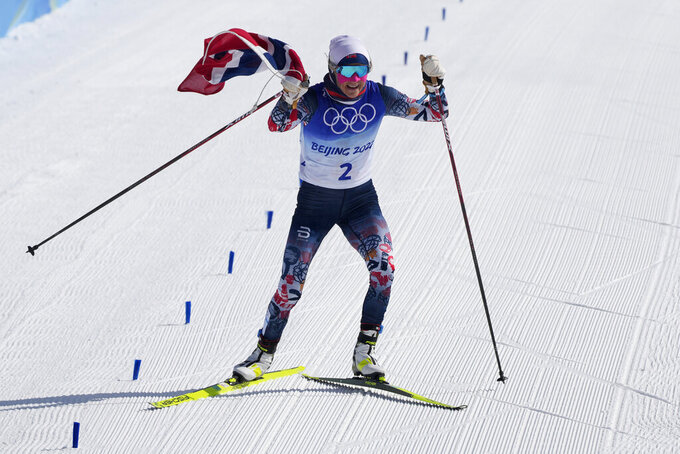 ZHANGJIAKOU, China (AP) — Norwegian great Therese Johaug won her third gold medal of the Beijing Olympics on Sunday and Jessie Diggins took silver for the best result by an American in an individual cross-country skiing event since 1976.

Fighting fierce winds and brutal temperatures, Johaug went out front early in the 30-kilometer mass start race and held on to win in 1 hour, 24 minutes, 54 seconds. Johaug also won the skiathlon — the first gold medal of the Olympics — and the 10-kilometer classic race.

“I’m born in a small place where there’s a lot of wind and a lot of cold temperatures in the region, so this was nothing for me,” Johaug said.

Diggins, also skiing alone for much of the race, kept a steady pace behind the Norwegian as gusts whipped across the tracks and battered the skiers, many with tape on their faces to protect from the cold. She dropped to the ground after crossing the finish line, 1:43.3 behind Johaug.

“Every last drop of energy went into that race," Diggins said. "The last two laps, my legs were cramping. We had amazing cheering out there, and I thought, I just can’t give up, I have to put everything I had into the snow today and finish with nothing left. I did try really, really hard.”

Diggins said she was sick with food poisoning the day before, spending the Saturday in bed and force-feeding herself.

“I was feeling pretty bad 24 hours ago,” the American said. "I was talking to my parents and my mom said, ‘Don’t decide how you feel right now. Just go out there and ski because you love to race.’ And she was right.

“That might have been the best race of my entire life, I’m not going to lie," Diggins said. “It was also maybe the hardest race of my whole life.”

Kerttu Niskanen of Finland led a chase group to the line for bronze, 2:33.3 behind.

“I told myself, I’ve come fourth so many (expletive) times, I’m not going to come fourth again," Niskanen said. "It wasn’t so bad during the race. It’s actually much worse standing here doing media interviews.”

Diggins made cross-country skiing history for the United States at the 2018 Pyeongchang Olympics when she and Kikkan Randall won the team sprint — the country’s first gold medal in the sport. Diggins set another U.S. Olympic record at the Beijing Games by being the first woman to win an individual medal when she took bronze in the sprint.

The silver matched the best result ever by an American in an individual cross-country skiing event. Bill Koch won silver in the men's 30-kilometer race at the 1976 Innsbruck Olympics.

Temperatures hovered around minus 14 degrees C (6.8 degrees F) on Sunday but the wind chill made it much colder. The women skied four laps on a 7.5-kilometer (4.6-mile) course.

Johaug pushed the pace on the first lap, creating a long string of single skiers snaking around the corners and downhills.

At the first check point at 2.9 kilometers, Johaug, Diggins, Ebba Andersson of Sweden and Delphine Claudel of France created a gap. Rosie Brennan, Krista Parmakoski and Niskanen were about seven seconds behind, but the gap grew to 28 seconds by the end of the first lap.

Natalia Nepryaeva, the World Cup leader, fell behind and dropped out of the race before the end of the first lap. At the 8.8-kilometer mark, Claudel dropped off the pace.

Johaug pulled away from the leaders at about 10 kilometers, with Diggins and then Andersson chasing. The Norwegian maintained her trademark fast tempo on the climbs, but Diggins stayed close, trailing by about 23 seconds.

At the halfway point, Johaug led Diggins by 27 seconds with Andersson 1:15 behind.

With one lap to go and Johaug and Diggins out front, the chase group caught Andersson and Niskanen pulled ahead in a sprint.

Brennan said training in the cold helped her hang on for sixth place, 2:38.7 behind.

“Luckily, I’ve spent the last decade training in Alaska," the American said. "We’ve had some pretty miserable days training, so I tried to think about those and remind myself that I’m tough enough to handle it all and that everyone’s out there facing the same conditions. Those that put their head down can make it happen.”