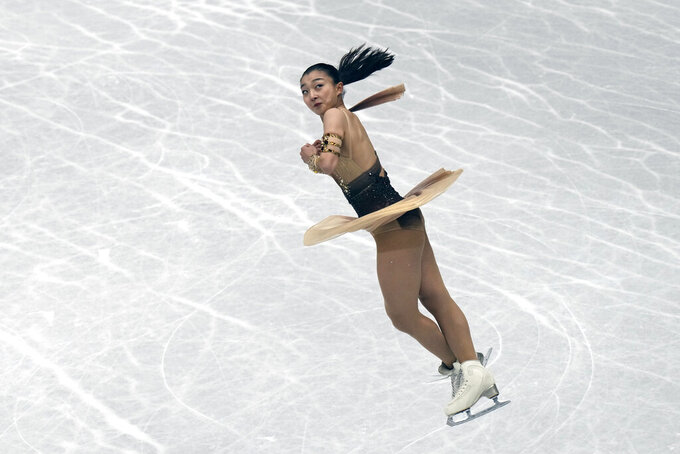 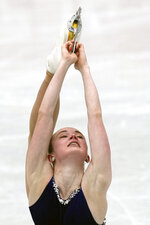 The U.S. pairs team of Alexa Knierim and Brandon Frazier took the lead after the short program Wednesday at the figure skating world championships in France, where the majority of Olympic figure skating medalists are absent because of the ban on Russian athletes from international competition.

Knierim and Frazier scored a personal-best 76.88 to lead American teammates Ashley Cain-Gribble and Timothy LeDuc by just over a point entering Thursday's free skate. Riku Miura and Ryuichi Kihara of Japan were in third place.

“We're proud of ourselves for continuing to build at each competition for our second season together,” said Frazier, who along with Knierim helped the U.S. win team silver in Beijing — a medal that could become gold pending an investigation into Russian doping. “It takes a lot of time to build in the international circuit. I think we're just doing our best.”

While far out of contention in 13th place out of 14 pairs, Sofiia Holichenko and Artem Darenskyi of Ukraine might have left the biggest impression on the receptive crowd in France. It took them six days to travel from war-torn Dnipro, first through Romania and then through Italy and Poland, before they finally arrived at the world championships.

“We had a little break after coming home from the Olympics and then the war started,” Holichenko said. “My whole family is in Kiev and there are bombs, explosions every day. Yesterday they were not able to get out all day.”

Holichenko and Darenskyi even changed their program to Ukrainian music in the hopes of inspiring their people.

“It means a lot for us to compete here,” Darenskyi said. “We want to show that Ukrainian athletes, no matter in which sport, are here to fight and that we are strong. We are fighting for our country. Ukraine will win.”

In the women's event, Olympic bronze medalist Kaori Sakamoto of Japan took a big lead over Loena Hendrickx of Belgium and American Mariah Bell after their short programs at Sud de France Arena in Montpellier.

Sakamoto broke up a Russian sweep of the podium in Beijing with her stirring bronze-winning performance. But none of her rivals — gold medalist Anna Shcherbakova, silver medalist Alexandra Trusova and controversial fourth-place finisher Kamila Valieva — is allowed at worlds with Russian athletes barred following the invasion of Ukraine.

Valieva is among several Russian skaters performing in an exhibition in Saransk this weekend.

“The Olympics was the biggest dream in my life,” Sakamoto said, “so now that I achieved that bronze medal, I was very delighted. ... I usually do poorly at worlds, so I want to finish both short and free program with a perfect skate.”

Sakamoto’s short program, set to music from the film “Gladiator,” featured a triple flip-triple toe loop and earned huge component marks for a score of 80.32 points. That was more than five points clear of Hendrickx, who placed seventh in Beijing, and nearly eight points ahead of Bell, who finished 11th at the Olympics.

“I had a really good time,” said Bell, whose score of 72.55 was a personal best. “I was really enjoying myself and I felt really in the moment. I wasn't thinking too much about points or how I felt at the end.”

You Young of South Korea was fourth after her short program. In fifth place was U.S. skater Alysa Liu, who along with her father Arthur Liu — a former political refugee — was among those targeted in an elaborate spying operation that the Justice Department alleges was ordered by the Chinese government ahead of the Beijing Games.

“I was relieved and happy," Alysa Liu said after Wednesday's performance. “I was very emotional.”

Just about every discipline is wide open at the world championships because of Russia's absence — even for the men, where Olympic champ Nathan Chen is out due to injury. But none as much as the pairs competition, where Olympic champions Sui Wenjing and Han Cong and Chinese teammates Peng Cheng and Jin Yang are also absent from worlds.

When you combine their absence with Russian silver medalists Evgenia Tarasova and Vladimir Morozov, bronze medalists Anastasia Mishina and Aleksandr Galliamov and fourth-place Aleksandra Boikova and Dmitrii Kozlovskii, it leaves Knierim and Frazier — who were sixth in Beijing — as the top team from the Olympics at the world championships.

They proved their newfound status as medal favorites with a strong short program Wednesday in France.

“We're very grateful to be here and have a chance to do these programs again,” Knierim said. “Going out and skating well — skating like we do in practice — it's very fulfilling. It's a nice way to end the season in the short program segment.”