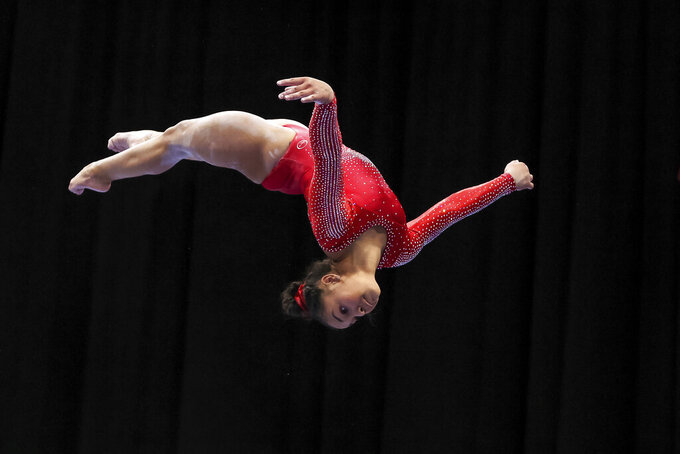 TAMPA, Fla. (AP) — Konnor McClain arrived in Texas last spring adrift, her confidence shattered. The gymnastics that came so easily for so long to the precocious teenager had turned shaky. Uncertain.

At one point last spring, she felt she was “the most garbage gymnast ever." She watched the 2021 U.S. Championships from the stands and caught the Olympics on TV, wondering if the dream that once appeared so tantalizingly close had slipped out of reach, maybe for good.

There McClain was on Sunday night during the final night of the 2022 championships, the talent that had always been apparent on full display, buoyed by a self-belief borne out of a mix of loss, grief and determination.

The transformation that began when she switched gyms in a rush last spring ended with the 17-year-old atop the podium, a gold medal around her neck and her self-belief restored.

McClain posted a two-day total of 112.750, just ahead of Shilese Jones at 111.900. Not bad for an athlete nursing stress fractures in both shins and less than a month removed from a concussion suffered during training.

Perhaps even more remarkable, McClain estimates she's at around 75 percent healthy, optimistic she'll be in even better shape at the world championships in Liverpool, England this fall.

“Anything can happen,” McClain said. “So I’m excited for the future.”

One that is back to being wide open.

McClain was expected to be a factor in the run-up to the 2020 Olympics but struggled so much early in the competition season last spring that she needed to make a change, moving abruptly from West Virginia to Texas. She's rediscovered herself at Dallas-based World Olympic Gymnastics Academy, owned and operated by Valeri and Anna Liukin, the parents of 2008 Olympic champion Nastia Liukin.

The process has been arduous, both inside and outside the gym. She lost her father and grandmother in the span of a week around New Year's. She won the Winter Cup in late February but had trouble staying healthy during the spring and early summer.

She arrived in Florida last week hoping to simply build momentum toward the world championship selection camp in October. She did far more than that, taking the lead through one rotation on Sunday night and never letting go.

McClain began Sunday just less than a point behind Jones but took the lead in the first rotation when she drilled her double-twisting Yurchenko vault while Jones hopped off the balance beam. McClain never gave the lead back, though there were some nail-biting moments late.

Wearing a bedazzled red leotard with her bun held in place by a matching red scrunchie, McClain was up by a half-point going into the final rotation but lost her balance while trying to complete a wolf turn spin on floor exercise. Her score of 13.850 opened the door for Jones, who was waiting to go on uneven bars as McClain's score flashed.

It appeared for most of Jones' polished bars set that she was ready to slip by McClain. At least until her dismount, which Jones under-rotated, forcing her to sit on the mat, her hopes of a national championship gone.

It was a difficult ending to an otherwise encouraging meet for the resilient 20-year-old, who promised her father Sylvester before his death from kidney disease last December that she would press on in hopes of reaching the 2024 Olympics.

It's a goal that appears in reach if she can build on two days that showcased her power, precision and maturity.

“I’m just super excited to be back out here,” Jones said. “You know, to fall twice and still end up in second place, this just really only the beginning for me.”

Even with reigning Olympic champion Sunisa Lee waiting before returning to elite competition and Simone Biles on sabbatical, the Americans appear to be in good position to reclaim the top of the podium at the 2022 world championships.

Jordan Chiles finished third in her first elite meet since winning a silver in the team competition at the Tokyo Olympics. Kayla Dicello took fourth, with reigning Olympic floor exercise champion Jade Carey in fifth. Leanne Wong, who claimed silver in the all-around at the world championships last fall, overcame a foot injury to put together two graceful sets on bars and beam.

Those three, along with McClain, Jones, DiCello and Skye Blakely appear to be the top contenders to make the five-woman team that will head to Liverpool, England for world championships in late October.

The team won't be selected until mid-October. Yet a year removed from a second-place finish to the Russian in Japan, the Americans appear to be a threat to return to the top of the sport even with reigning Olympic champion Sunisa Lee and superstar Simone Biles both on sabbatical from elite competition.

“I still think we’re going to be able to pull through and have an amazing outcome,” Chiles said.

With McClain, her confidence restored, on the cusp of an opportunity she feared would never come.