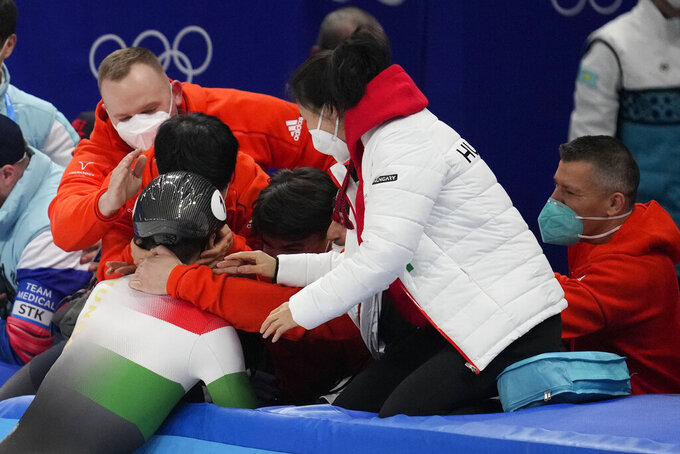 Liu Shaoang of Hungary, is congratulated by teammates after winning the men's 500-meters final during the short track speedskating competition at the 2022 Winter Olympics, Sunday, Feb. 13, 2022, in Beijing. (AP Photo/Natacha Pisarenko)

BEIJING (AP) — In the topsy-turvy world of short track speedskating, the Liu brothers are keeping steady and piling up Olympic medals.

Liu Shaoang of Hungary won the 500 meters on Sunday for his third medal in Beijing and his country's first-ever individual gold at a Winter Games. Older brother Liu Shaolin Sandor got knocked out in the early rounds, but he has a bronze from the mixed team relay.

“I just suggested to my brother, ‘Don’t worry, we can definitely win another gold medal together,’" Liu Shaoang said.

He led all the way and crossed the line in 40.338 seconds at Capital Indoor Stadium, where Olympic figure skating champion Nathan Chen looked on. Liu’s other medals were both bronze, in the 1,000 and the mixed team relay.

Ivliev appeared more excited than Liu at the finish, with the Russian pumping his arms and letting out a whoop.

“When I crossed the line I didn’t have any emotions,” Liu said. “I guess I still need some time to realize what happened.”

The A final was missing some of the biggest names. Defending champion Wu Dajing of China was relegated to the B final, which he won. Ren Ziwei of China along with Liu Shaolin Sandor were eliminated in the quarterfinals.

Hwang Daeheon of South Korea went out in the semifinals after getting a penalty for a late pass that caused contact with Dubois. The Canadian was advanced to the A final and won his second medal in Beijing. He took silver in the 1,500.

“I don’t know about expectations,” Dubois said, “but definitely higher than what I expected.”

The 500 was devoid of the chaos that defines short track, with no one crashing in the five-lap sprint. Without Wu in the A final, the limited amount of Chinese fans had little reason to cheer.

Led by Suzanne Schulting, the Netherlands won the 3,000 relay, breaking a hold on the event by South Korea.

Schulting collected her second gold and third medal overall in Beijing. She earned silver in the 500 and gold in the 1,000.

She screamed and raised her arms in triumph after crossing the finish line.

The Dutch team of Schulting, Selma Poutsma, Xandra Velzeboer and Yana van Kerkhof lowered their own Olympic record with a time of 4:03.40. Four years ago at the Pyeongchang Games, the Dutch finished third.

“We know we are good in front and that’s what we tried to do,” Van Kerkhof said. “We let Selma start because she’s really fast. We had to keep that position and we did. One time we were really close, but we just had to skate fast.”

They dedicated their victory to late teammate Lara Van Ruijven, who died at age 27 in July 2020. She became ill at a training camp in France, was placed in a medically induced coma and died a few days later.

“She is very special,” Schulting said. “We are so sad she is not here with us. She would be really proud.”

There were no crashes in the four-team final. Canada finished fourth.

Arianna Fontana led Italy to victory in the B final. The Russians were penalized and the United States was penalized for a lane change that caused an obstruction. American skater Kristen Santos crashed in the race.