For love or country: Speedskater Fontana feuds with Italy 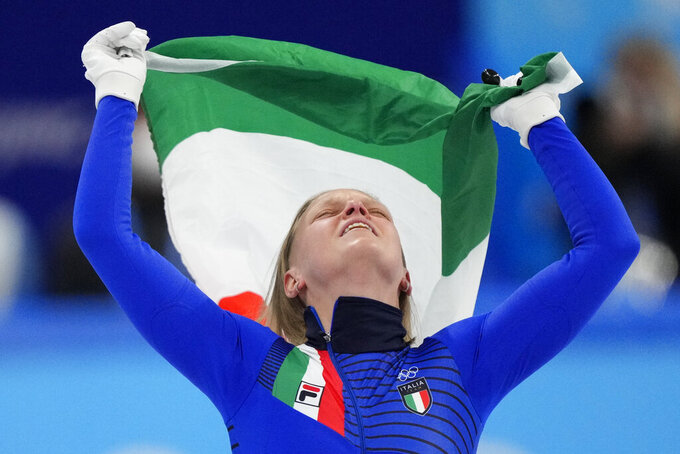 Arianna Fontana of Italy, celebrates after winning the final of the women's 500-meter during the short track speedskating competition at the 2022 Winter Olympics, Monday, Feb. 7, 2022, in Beijing. (AP Photo/Bernat Armangue)

BEIJING (AP) — When so many around her were crashing or getting penalized, Arianna Fontana kept her cool.

Just getting to the Beijing Olympics had been hard enough. Winning her 10th career medal in short track speedskating may have seemed easy by comparison.

The 31-year-old Italian made a bold pass late to take the lead in the 500 meters, skating to victory against world champion Suzanne Schulting of the Netherlands and world record holder Kim Boutin of Canada.

Fontana shared a rink-side kiss with her coach and American husband, Anthony Lobello Jr., in celebration. That the couple was in Beijing was a victory, too.

“Me and my family had to go through a bad situation, people that didn’t want me here. My federation wasn’t supportive,” Fontana said. "They didn’t want me having my husband as a coach, but today we proved he was the best possible coach. They didn’t help; in fact, they tried to find ways that we wouldn’t be here at all. It was tough.”

Fontana said Italian federation officials passed her in the hallway after her victory on Monday and didn’t offer congratulations.

Fontana won gold in the 500 four years ago in Pyeongchang, but she said it was made clear by Italian skating officials and the national coaching staff that Lobello wasn't welcome as her coach. She took a year's break after the 2018 Olympics, leaving Italy and relocating to Hungary to train in the lead-up to Beijing.

“I wasn't welcome. It was not a good environment for me to be in,” she said. “There’s some major problems that are obviously not me and my coach.”

Lobello had his own troubled relationship with US Speedskating. He skated for the U.S. at the 2006 Turin Olympics, then switched his nationality to compete for Italy in 2014. He was eligible to do so because his paternal grandfather is Italian.

He began dating Fontana in 2012 and the couple wed two years later. Lobello started coaching Fontana after he retired from skating. Working together, she won three medals in Pyeongchang.

“He was my best choice," she said. "My best decision to have him on my side.”

Fontana has one more chance at a medal in Beijing in the women's 3,000 relay starting Wednesday.

The next Winter Games will be in Milan-Cortina in 2026. Fontana's first Olympics in 2006 were in her home country, where at 15 she became the youngest Italian to medal. The idea of finishing her career at home is enticing.

Of course, she wants to win. With her husband by her side again.