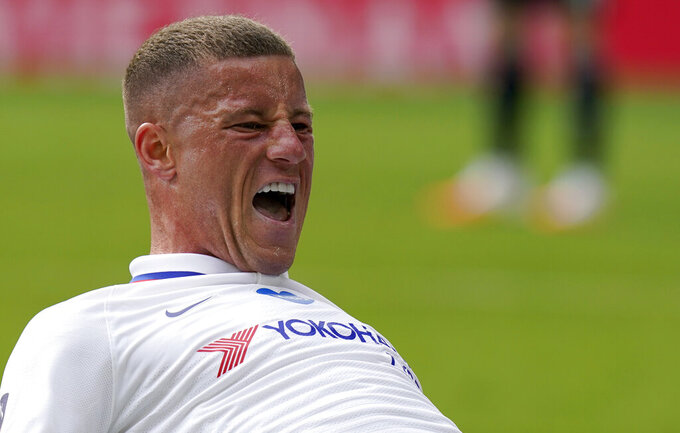 A look at what’s happening around European soccer on Wednesday:

Chelsea can strengthen its Champions League push and deepen West Ham's relegation fears when it travels across London to the Olympic Stadium. Chelsea is fourth in the Premier League, two points clear of Wolverhampton, and West Ham is only out of the relegation zone on goal difference. Chelsea is now only a point behind third-place Leicester. Brendan Rodgers' side plays at Everton after drawing both league games since the restart and was knocked out of the FA Cup by Chelsea. Arsenal is in 10th as it hosts last-place Norwich.

Villarreal will visit Real Betis aiming for a fifth win in six games since the Spanish league resumed play after a three-month stoppage for the COVID-19 virus. Paco Alcácer has scored in two consecutive matches for the “Yellow Submarine” and has helped it move to within six points of a Champions League berth. Valencia will host Athletic Bilbao in its first game since firing coach Albert Celades. Its hopes are fading of reaching the top four spots that qualify for Europe's top club competition. Voro González will be Valencia's caretaker coach. Also, Levante visits Valladolid and Granada is at Alavés.

Inter Milan needs a win over relegation-threatened Brescia to hold off hard-charging Atalanta in the race for third place. Inter leads Atalanta by four points ahead of the Bergamo squad’s game against in-form Napoli on Thursday. Also, Zlatan Ibrahimović could return from injury when AC Milan visits last-place Spal looking to win its third straight game of the restart. In other games, it’s: Bologna vs. Cagliari; Fiorentina vs. Sassuolo; Hellas Verona vs. Parma; and Lecce vs. Sampdoria.