Meronk breaking boundaries as first Polish player in a major 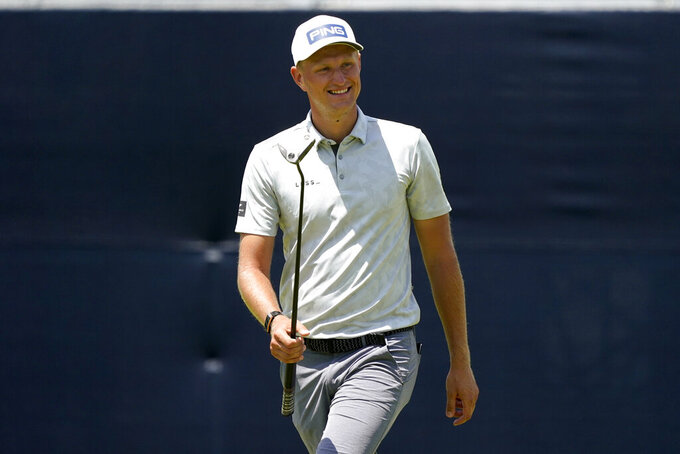 Adrian Meronk, of Poland, smiles after his putt on the 18th green during a practice round of the U.S. Open Golf Championship, Tuesday, June 15, 2021, at Torrey Pines Golf Course in San Diego. (AP Photo/Marcio Jose Sanchez)

SAN DIEGO (AP) — Adrian Meronk takes his place in major championship history this week before even hitting a shot in the U.S. Open.

Any introduction of Meronk usually starts with the same description: First Polish player.

“I've been breaking all the records,” Meronk said with a laugh after finishing up his final practice session Wednesday for his major championship debut at Torrey Pines.

Next month, he will be first Polish golfer in the Olympics.

“It's nice to break all the new boundaries,” Meronk said. “But I don't want to stop. I want to keep going forward.”

Torrey Pines figures to be a tall task, even for the athletic 6-foot-6 frame he carries. It's unlike any course Meronk has played, certainly nothing like the Toya Golf & Country Club course near Wroclaw, Poland, where he learned to play.

It started with a chance to spend time with his father, who got hooked on the game while in Hamburg, Germany. That's where Meronk was born until the family moved back to Poland when he was 3.

“Since I can remember, I've always been on the golf course,” Meronk said.

He tried other sports — volleyball, basketball, soccer — but kept coming back to golf. He loved the peaceful feeling of being outdoors, and that no shot was ever the same.

“It's not boring,” he said. “I tried tennis. It was quite boring to me. I played team sports, but I always got mad because no one passed me the ball.”

He loved golf enough to take the seven-hour roundtrip to Wroclaw with his father, and the family eventually moved there. Meronk was good enough to be invited to a national junior camp about the time Matthew Tipper of Wales arrived as the coach.

They hit it off and have been together ever since. Tipper once told Golf Digest it didn't take long to realize Meronk had what it took to play on the European Tour or PGA Tour.

The first step was America. Tipper told him he had the potential to get a scholarship to a U.S. college, and they looked at places with a history of European players. What stood out was East Tennessee State, which a few years earlier had signed a teenager from Northern Ireland.

That was Rory McIlroy, who chose to turn pro instead. It worked out for him.

“I still remember an email I got from his coach and I remember thinking, ‘Poland?’” said Fred Warren, now retired after a distinguished coaching career at East Tennessee State.

“I was the first to get back with them and he pretty much committed to us,” Warren said. “He was going to come to Florida for a tournament, and I was going to see him.”

Warren figured there wouldn't be a lot of coaches at the tournament, so he waited until after the first round. What surprised him was how busy it was.

“There were a lot of coaches there, which alarmed me,” Warren said. “He shot an 8-under 64 and was leading and I thought, ‘This just got a lot harder.’ But he kept his commitment.”

Meronk won five times at East Tennessee States, stayed four years and earned a degree in business finance. He knew he wanted to turn pro after two years, but wouldn't trade staying all four for his degree. He traveled and competed against the likes to Jon Rahm, whom he saw again this week at Torrey Pines for the first time since then.

He didn't start learning English until he was 16 and began to focus on college. And even that didn't prepare him for Johnson City, Tennessee.

“I had been to the States, but not the Southern states,” Meronk said. “The food, the accent, the habits, the culture. My freshman year was quite tough. I didn't talk much. I just watched people and want they do and tried to learn.”

Meronk twice played in the Palmer Cup, Ryder Cup-styled matches between college players from the U.S. and Europe, and it was the second trip outside Chicago that got Warren's attention. In the small gallery were people waving the Polish flag.

“I remembering thinking this guy can be a star if you're the first Pole,” Warren said. “And he carries it real well. Some might wilt under it. He realizes he's got a gift and he can be a trailblazer for Poland.”

The U.S. Open is a start. The big push figures to be in Tokyo. Meronk is No. 49 in the Olympic ranking for the 60-man field, and this is the last qualifying week. He is assured a spot on the team, something he never imagined possible.

“When I found out golf is coming back to the Olympics, that immediately was one of my goals to represent Poland,” he said. "When people see golf in the Olympics, it will be a huge factor. It's going to be a positive thing. There's still a stereotype in Poland that golf is only for the wealthy, that it's not a sport. If they see me on TV playing in the Olympics, that will help, for sure.

“I'll try my best to grow golf as big as possible.”