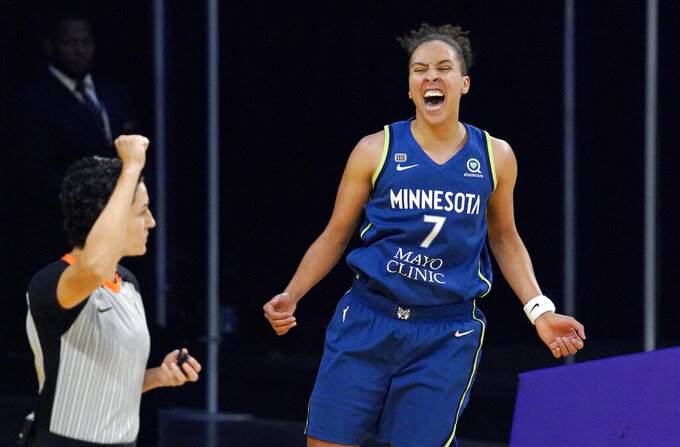 Minnesota Lynx guard Layshia Clarendon, right, celebrates after scoring and drawing a foul during the second half of a WNBA basketball game against the Los Angeles Sparks Sunday, July 11, 2021, in Los Angeles. The Lynx won 86-61. (AP Photo/Mark J. Terrill)

NEW YORK (AP) — No team has been playing better than Minnesota the past few weeks as the WNBA enters its month-long Olympic break.

The Lynx are riding a seven-game winning streak and have turned around their season.

“You can feel the chemistry, you can feel the resiliency,” Minnesota coach Cheryl Reeve said. "But I don’t think you have that without going through hard times first. For us, coming out of the gate, we knew weren’t a very good team. But, out of necessity, we grew into it.″

A big reason for the change has been the addition of Layshia Clarendon, who Minnesota signed after its 0-4 start. During the current winning streak, she's averaging 14-1 points, 6.4 assists and has shot nearly 63% from the field. The Lynx are 12-3 with Clarendon, who was cut from New York early in the season.

While most teams would love to keep going while playing well, Reeve was happy for the break — although she'll still be busy as an assistant for the U.S. women's basketball team.

“I am very grateful for the break,″ Reeve said. “But I’m glad we ended on a really good note.″

The Lynx have climbed the standings and moved up to fourth in the AP power poll this week.

“Feels awesome to finish strong and it gives us a lot of confidence,” said Lynx forward Napheesa Collier. “When we come back we just need to tweak things.”

1. Seattle (16-5): The Storm won the Western Conference bid into the Commissioner's Cup championship after winning two of three last week. Nearly half the team is headed to Tokyo to compete in the Olympics so they won't be well rested coming out of the break.

2. Las Vegas (15-6): The Aces dropped two of their last three games heading into break. They were missing Liz Cambage for the final two games —which they split — because she was training with Australia. Las Vegas has a solid top seven-player rotation, including potential sixth women of the year Dearica Hamby and Kelsey Plum.

3. Connecticut (14-6): The Sun will represent the Eastern Conference in the Commissioner's Cup final after a stellar week. Jonquel Jones has been playing extremely well since returning to the team from playing overseas in the EuroBasket tournament. She averaged 20.5 points, 16.5 rebounds and 3.5 assists to help Sun go undefeated last week.

4. Minnesota (12-7): Kayla McBride has been a major reason for the success of the Lynx, averaging just under 19 points over her last five games.

5. Chicago (10-10): The Sky lost a disappointing overtime game to Washington in their lone contest last week. The Sky should be well-rested and ready for the rest of the season when they return from the Olympic break with most of their core —excluding Stefanie Dolson — not competing in the Olympics.

6. Phoenix (9-10): The Mercury had impressive wins over the top two teams, beating both Seattle and Las Vegas. They did it without Diana Taurasi, who is nursing a left hip injury.

7. New York (10-11): The Liberty had a tough weekend on and off the court as travel issues in and out of Indiana led to long airport delays. Owner Joe Tsai said on social media he would work to rectify the problem in the future.

7. Washington (8-10): The Mystics headed into the break with a win and now look forward to being mostly healthy when the WNBA returns. No team has been hit as hard by injuries the first half of the season.

10. Atlanta (6-13): It's been a struggle for the Dream lately as they dropped seven of their last eight games. Hopefully the break will give them a chance to regroup and recharge.

12. Los Angeles (6-13): The Sparks fell to the final spot in the power poll as they have been on a six-game skid. Los Angeles hasn't scored more than 79 points in any of those losses.

Tina Charles had 34 points, 17 rebounds and two steals as well as a basket just before the regulation buzzer to force overtime and help Washington beat Chicago in the team's lone game last week. Other players receiving votes included Jonquel Jones of Connecticut, Layshia Clarendon of Minnesota, Brittney Griner of Phoenix and Teaira McCowan of Indiana.

Team WNBA vs U.S. Olympic team, Wednesday. For the first time since 2000 there will be an All-Star Game in an Olympic year. While most All-Star contests are fun exhibition games this could have a more competitive feel to it with the U.S. team looking to prepare for the Tokyo Games and the WNBA squad featuring players who feel they should be Olympians.