Monaco gets its best Olympic sport finish, 6th in bobsled 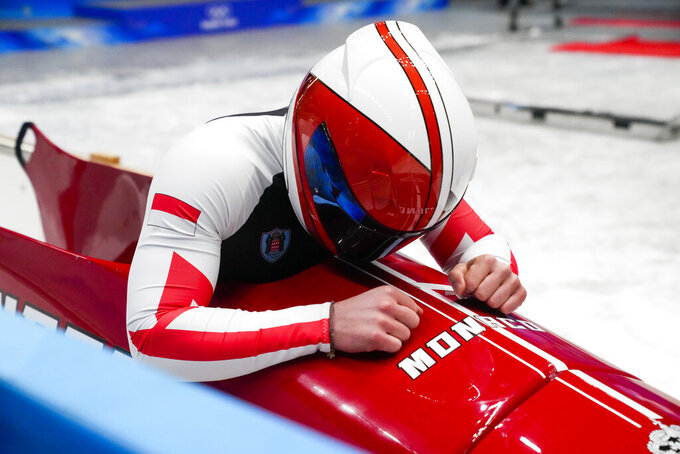 Rudy Rinaldi, of Monaco, looks down after the 2-man heat 4 at the 2022 Winter Olympics, Tuesday, Feb. 15, 2022, in the Yanqing district of Beijing. (AP Photo/Dmitri Lovetsky)

BEIJING (AP) — Monaco just got its best finish ever in an Olympics.

Let’s explain: The bobsled team of Rudy Rinaldi and Boris Vain placed sixth in the two-man event that ended Tuesday at the Beijing Games, by far the best placing that the tiny Mediterranean principality — known for its glitz, glamour and riches — has ever had in a sporting event at the Olympics.

“It means a lot,” Rinaldi said. “We struggled a lot these past four years. I think we knew that one day, we could fight for this. So, of course, we’re happy. We’re happy for Monaco.”

The Monaco sled was behind only three Germans, Switzerland and Austria. Rinaldi was understandably emotional after helping deliver Monaco’s finest Olympic moment.

That is, unless you want to call architecture a sport.

In 1924, Julien Medecin won a bronze medal for Monaco in architecture, part of the long-defunct art competition at the Olympics. That medal doesn’t count in the official Olympic standings, and in another quirk that event had no gold medal award — just silver and bronze, since the judges didn’t believe any of the projects that were submitted were worthy of gold.

Monaco is probably best known in Olympic circles for bobsledding — which started when Prince Albert II, an International Olympic Committee member since 1985 who has made no effort to hide his passion for sports, competed in the 1988 Calgary Games. Those were the first of five Olympic appearances for Albert, who also competed under the name Albert Grimaldi.

The prince — also an enthusiast of skiing, swimming, windsurfing and judo — never placed better than 25th in an Olympic bobsled race.

Bobsledding has been the job for Rinaldi and Vain for about a decade now. They were 19th in the two-man event at the Pyeongchang Games four years ago, and before Tuesday, Monaco’s best Olympic bobsled showing was a 12th-place effort by Patrice Servelle and Jeremy Bottin at the 2006 Turin Games.

“We are a small country,” Rinaldi said. “I guess we needed more time to build something strong, to learn from mistakes.”

Counting the Summer Games, and excluding Medecin’s finish, Monaco’s best Olympic showing in any sport was ties for ninth in taekwondo at the 2000 Sydney Games, judo at the 2012 London Games and judo again at last year's Tokyo Games.

Rinaldi said he is likely retiring, which has been his plan for a while. He and Vain leave with no medal, but see no reason to be disappointed.